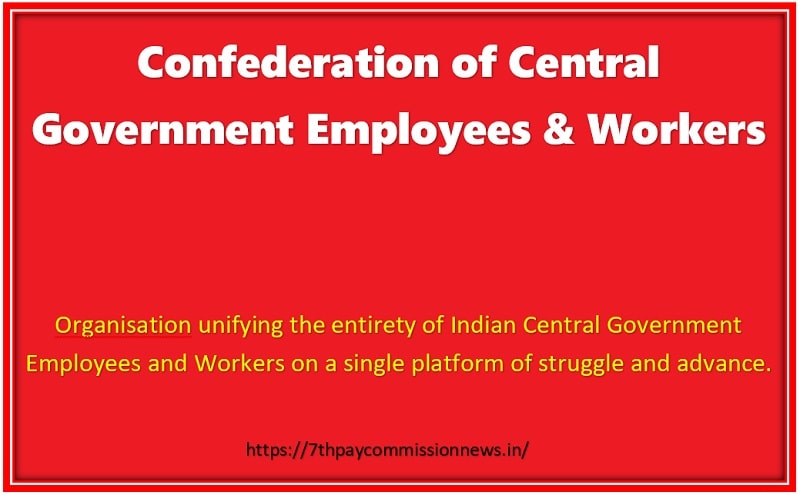 Confederation is one of the largest organizations with a large membership among Central Government employees and workers.

Latest Updates and Newsletters of Confederation:

NC JCM (National Council Joint Consultative Machinery): Nomination on the Staff Side only those Federations/Associations/Unions will be recongised which have enjoyed recognition in the past, and which represent broadly and adequately all the categories of employees of a Department

1. What is Joint Consultative Machinery?
The scheme of Joint Consultative Machinery is a platform for constructive dialogue between the representatives of the staff side and the official side for peaceful resolution of all disputes between the Government as employer and the employees. The scheme was introduced in 1966 with the objectives of promoting harmonious relations and securing the greatest measure of
cooperation between the Central 1 Government as the employer and the employees in matters of common concern and with the object of further increasing the efficiency of the public service combined with the well being of those employed. The scheme is a non statutory one mutually agreed upon between the staff side and the official side.

2. What is the applicability of the JCM Scheme?
The scheme covers all regular civil employees of the Central Government, except:

3. What is the structure of the Joint Councils under the
JCM Scheme?
The scheme provides for setting up of Joint Councils at the National, Departmental and Regional / Office levels. The National Council, chaired by the Cabinet Secretary, is the apex body.

5. What is the time schedule for holding meetings of the
National/Departmental Councils?
As per the JCM Scheme, ordinary meeting of the National Council/ Departmental Council may be held as often as necessary as but not less than once in four months.

6. How recognition is granted to the staff associations?
The Department of Personnel & Training being the nodal department for matters relating to Joint Consultative Machinery and Compulsory Arbitration, has notified Central Civil Services (Recognition of Associations) Rules, 1993 for the purpose of granting recognition to various service associations. Recognition is actually granted by the concerned Ministry/
Department in accordance with the CCS (RSA) Rules, 1993. In case of any doubt or confusion, the matter is referred to the JCA Section of the Department of Personnel & Training for clarification/ advice.