You are here: Home / Confederation News / Withdraw the orders on freezing the DA and impounding of arrears of Central Govt. Employees and Pensioners till June 30th 2021

DECISION OF THE NATIONAL SECRETARIAT MEETING HELD ON 28.06.2020 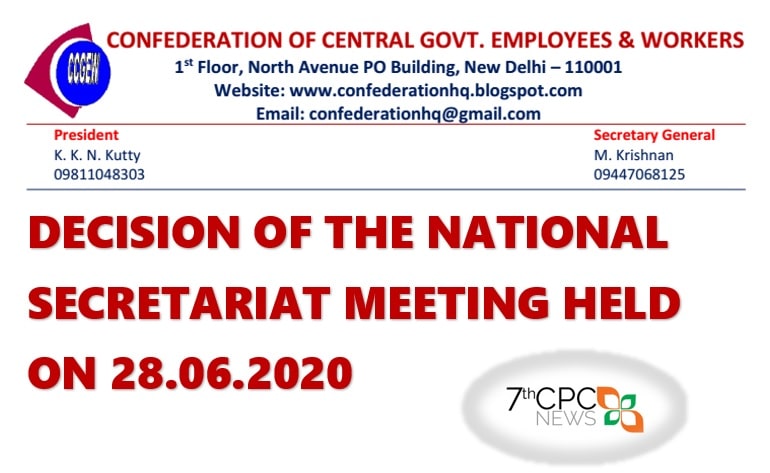 DECISION OF THE NATIONAL SECRETARIAT MEETING HELD ON 28.06.2020

Before Commencement of the meeting, one minutes silence was observed paying homage to the Jawans who were martyred on the India-China border and also to the departed leaders.

Com. R. N. Parashar, Secretary General, presented a brief report on the agenda items and also about the activities taken place during the period after the Nagpur national Conference. Thereafter the agenda items were taken for discussion. Detailed discussion took place on all agenda items. Many other issues faced by the Central Government Employees, especially COVID-19 related issues, were also discussed.

The following decisions are taken.

1. Review of the 26th National Conference held at Nagpur

The Conference was well organised and the arrangements made were excellent. About 36 affiliates and 13 state level COCs attended. 213 delegates and 13 visitors attended (Male – 238, Female-18). The Conference was jointly inaugurated by Com. Tapan Sen (General Secretary, CITU) and Com. Amarjeet Kaur (General Secretary, AITUC). The National Secretariat congratulated the COC, Vidarbha Region, Nagpur under the leadership of Com. Nilesh D. Nasare, for making best arrangements for the successful conducting of the meeting.

2. Setting up of a committee for finalisation of Accounts for the period from 2016 to 2019.

(a) Secretary General, Confederation, shall write another letter to Com. Vrigu Bhattacharjee, Ex-Financial Secretary, to handover the accounts from the period from April 2016 to January 2020 along with all connected records, citing the decision of the national Secretariat held on 28.06.2020.

The National Secretariat decided that after completing the above formalities, the Accounts should be presented before the National Executive Committee meeting by not later than 15.08.2020.

After detailed discussion it is decided that the Secretary General and Financial Secretary shall issue notice to all affiliates and COCs directing them to remit up to date quota and to clear all arrears of quota and dues within one month. The Financial position will be further reviewed in the next national Executive meeting to be held before 15.08.2020.

4. Freezing of DA and DR and other related issues.

5. Charter of demands of Confederation.

Both the above agenda items were discussed together. It is decided that protest programmes should be organised, exclusively on Central Govt. Employees demands, by Confederation. In the revised Charter of demands adopted by the Nagpur National Conference, the following demands are to be added.

Secretary General and President is authorised to re-draft the Charter of demands and Circulate among all National Secretariat member for approval before publishing in website. The date of the protest programme is to be decided by President and Secretary General, preferably in the 3rd or 4th Week of July 2020. Next phase of programme will be decided by the National Executive Committee meeting to be held before 15.08.2020.

The National Secretariat felt that the disruptive activities initiated by the Ex-Financial Secretary has not affected the overall functioning of Confederation. Efforts are to be made to sort out the issues and to bring back the misguided comrades and to further strengthen the functioning of all affiliated organisations and COCs. It is decided that indiscipline and anti-organisational activities from any corner should not be compromised or tolerated.

The meeting authorised President and Secretary General to fix and notify the date of next National Executive meeting by not later than 15.08.2020.

The meeting decided to organise the protest programme against the anti-people and anti-worker policies of the Central Government at all important Centres on 03.07.2020. The Central TUs has included the DA freeze and impounding of arrears as one of the main demands. All affiliates and COCs are requested to ensure participation of Central Govt. Employees in the joint protest programmes of Central Trade Unions.

The meeting concluded with vote of thanks by Com. R. N. Parashar, Secretary General.