You are here: Home / Confederation News / Charter of Demands and Explanatory Notes – All India Strike on 2.9.2015

Charter of Demands and Explanatory Notes – All India Strike on 2.9.2015

3. Strict enforcement of all basic labour laws without any exception or exemption and stringent punitive measure for violation for labour laws.

5. Minimum wages of not less than Rs. 15,000/- per month with provisions of indexation.

6. Assured enhanced pension not less than Rs. 3000/- P.M. for the entire working population.

7. Stoppage of disinvestment in Central/State PSUs.

8. Stoppage of contractorisation in permanent perennial work and payment of same wage and benefits for contract workers as regular workers for same and similar work.

9. Removal of all ceilings on payment and eligibility of bonus, provident fund; increase the quantum of gratuity.

10. Compulsory registration of trade unions within a period of 45 days from the date of submitting applications; and immediate ratification of ILO Convention C 87 and C 98.

12. Against FDI in Railways, Insurance and Defence.

1. Effect wage revision of the Central Government Employees from 01.01.2014 accepting memorandum of the staff side JCM; ensure 5-year wage revision in future; grant interim relief and merger of 100% of DA; Include Gramin Dak Sevaks within the ambit of 7th CPC. Settle all anomalies of 6th CPC.

2. No Privatisation, PPP or FDI in Railways, Defence Establishment and no corporatization of Postal services.

3. No ban on creation of new posts. Fill up all vacant posts.

5. No outsourcing, contractrisation, privatization of governmental functions; withdraw the proposed move to close down the printing presses, the publications, form stores and stationery departments and medical stores Depots; regularize the existing daily-rated/casual and contract workers and absorption of trained apprentices.

6. Revive the JCM functioning at all level as an effective negotiating forum for settlement of the demands of the Central Government Employees.

8. No labour reforms which are inimical to the interest of the workers.

9. Remove the ceiling on payment on bonus

RESOLUTION ADOPTED BY THE NATIONAL EXECUTIVE COMMITTEE MEETING OF THE CONFEDERATION HELD ON 12.07.2015 AT NEW DELHI.

1. The National Executive of the Confederation which met at New Delhi on 12.07.2015 decided unanimously to endorse the call of the Central Trade Unions and independent Federations in the country for organizing one day nationwide strike on 2nd September 2015 to oppose the ongoing aggressive neo-liberal economic policies of the Government of India.

2. The meeting also noted with grave concern the rejection of a 5 years wage revision for Central Government Employees by the 7th Pay Commission and consequent demand of the benefit of merger of DA an Interim Relief.

The meeting also noted the advisory articles appearing in the corporate/controlled media against the wage revision of Central Government Employees to influence the recommendation of the 7th CPC. The meeting noted with grave concern the negative attitude of the Government towards three lakhs Gramin Dak Sevaks of the Postal Department by refusing to include them in the 7th CPC.

The meeting decided to exhort the affiliates to bring the contents of the memorandum of the staff side JCM once again to the employees and prepare them for the proposed indefinite strike action of the CGEs including Railways and Defence workers from 23rd November 2015.

3. The meeting decided to appeal to all state committees and affiliated organizations to take active part in all meetings and conventions organised by Central Trade Unions, jointly with state Government Employees Federation, Bank, Insurance and other public sector undertakings. The Confederation and its affiliates shall serve strike notice for the 2nd September strike on 11th August 2015 by holding massive demonstrations at the respective work places. 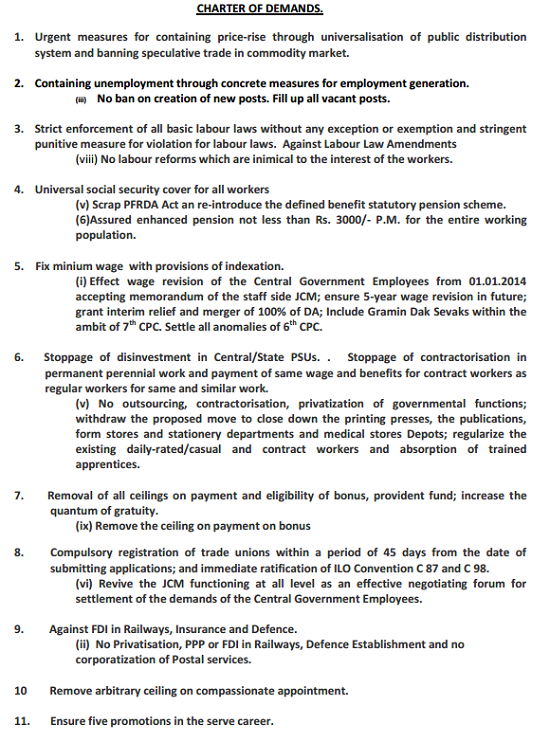