You are here: Home / NPS To OPS 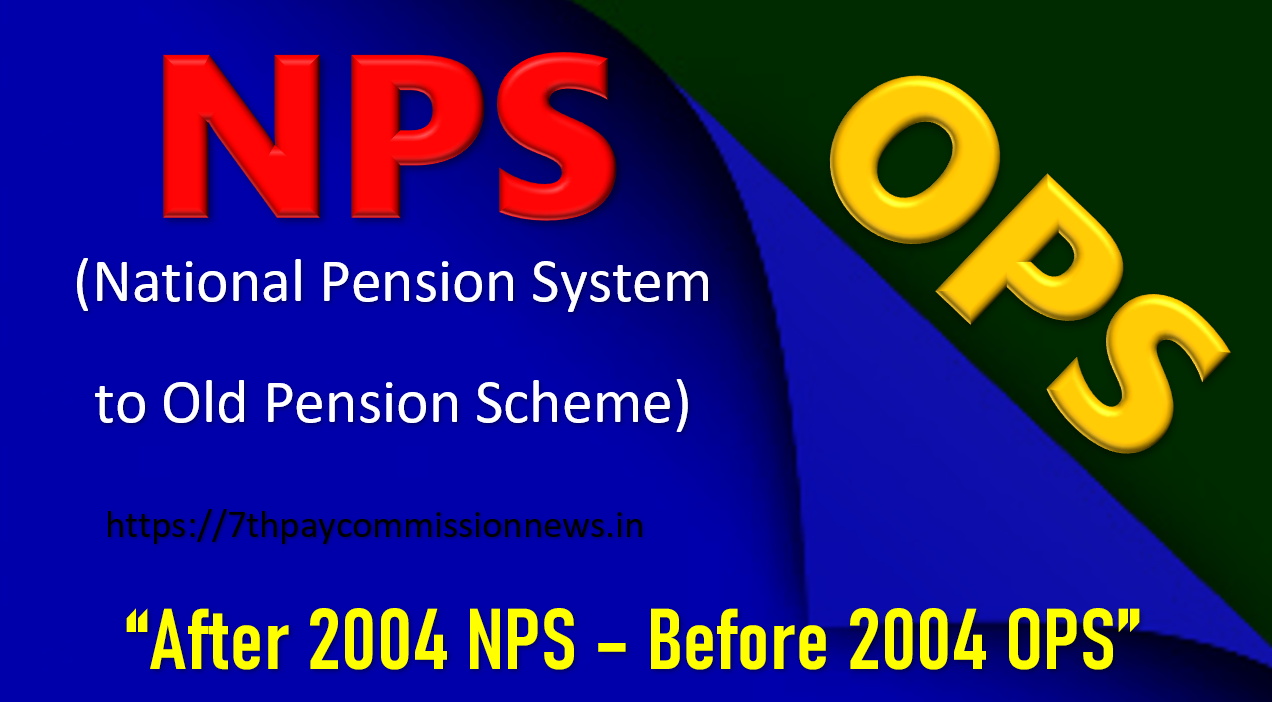 Introduction of New Pension Scheme (which is a contributory pension scheme) with effect from 1.1.2004.

Central Government Employees are dividing into two parts based on pension, one part is NPS Employees and another part is OPS Employees.

The main and first demand of CG Employees is now ‘Scrap NPS – Restore OPS’. After 2004 the demand is slowly getting higher tone year by year. Almost 15 years passed, the total strength of NPS subscriber is more than 18 lakh.

New Pension Scheme was implemented to the employees joined on or after 1.1.2004. All Employees Unions and Federations are opposed on that day of implementation and to implement the Old Pension Scheme.

Parliament Question and Answer about NPS

The National Pension System (NPS) was introduced by the Government of India to replace the defined benefit pension system. NPS was made mandatory for all new recruits to the Central Government service from 1st January, 2004, (except the armed forces in the first stage) and has also been rolled out for all citizens with effect from 1st May, 2009, on voluntary basis. The Government had made a conscious move to shift from the defined benefit, pay-as-you-go pension scheme to defined contribution pension scheme, NPS, due to rising and unsustainable pension bill. The transition aimed at freeing the limited resources of the Government for more productive and socio- economic sectoral development.

(b) NPS is open for subscription to all citizens of India, resident as well as non-resident, aged between 18- 65 years. A person after retiring at the age of 60 years can also join NPS and contribute till the age of 65 years.

(c) All citizens of the country, resident as well as non resident, aged between 18-65 years can subscribe to NPS, and can avail the following benefits under NPS:

ii. Deduction under Section 80C for contribution made to Tier II NPS account by Central Government employees for a fixed period of not less than three years, is allowed.
iii. In accordance to Section 10(12A) of the Income Tax Act, 1961, the entire 60% amount withdrawn as lump sum is tax-free.

iv. Partial withdrawal up to 25% of subscriber’s own contributions before attaining age of superannuation is allowed, subject to certain conditions.

v. Transparency and portability is ensured through online access of the pension account by the NPS subscribers, across all geographical locations and portability of employments.

Top News About NPS to OPS:

The Central Government had introduced the National Pension System (NPS) with effect from January 1, 2004 (except for armed forces). Pension Fund Regulatory and Development Authority (PFRDA), the regulatory body for NPS, has appointed NSDL as Central Recordkeeping Agency (CRA) for National Pension System. CRA is the first of its kind venture in India which is carrying out the functions of Record Keeping, Administration and Customer Service for all subscribers under NPS. CRA shall issue a Permanent Retirement Account Number (PRAN) to each subscriber and maintain database of each Permanent Retirement Account along with recording transactions relating to each PRAN.

In NPS, a government employee contributes towards pension from monthly salary along with matching contribution from the employer. The funds are then invested in earmarked investment schemes through Pension Fund Managers.

Scheme Information: As per the Gazette Notification dated January 31, 2019 issued by the Ministry of Finance (Department of Financial Services), the Central Government Subscribers w.e.f. April 1, 2019 have the option of selecting the Pension Funds (PFs) and Investment Pattern in their Tier- I account. The Subscriber can choose any one of the available Pension Funds and Investment Option as per their choice. If the choice is not exercised by the Subscriber, NPS contributions would be invested in the existing default schemes of the 3 Pension Fund Managers (PFMs), viz, LIC Pension Fund Limited, SBI Pension Funds Pvt. Limited and UTI Retirement Solutions Limited in a predefined proportion, as mentioned in the Statement of Transaction (SoT), as per the guidelines issued by PFRDA.

The Subscriber can select any one of the investment schemes as mentioned below:

What is NPS to OPS?

NPS is ‘National Pension System’ and OPS is ‘Old Pension System’. One of the major demands of Central Govt employees is to scrap NPS and reintroduce OPS (NPS to OPS).

What is the major difference between NPS and OPS?

What is the cut-off date for NPS?