The current status of ‘Expected DA from July 2022‘ is almost confirmed! The Dearness Allowance may be hiked by 4% from the existing level from 1st July 2022 for Central Government employees and pensioners! So, the total percentage of Dearness Allowance will change from 34% to 38% with effect from 1.7.2022!

You can check the current status of DA on basic salary: Select your current basic salary as per pay matrix level and click the ‘Calculate’ button. The tool will show the amount of Dearness Allowance with the old and expected percentage of DA.

Suspension of DA is revoked!

The Union Cabine Committee has decided to withdraw the temporary suspension on a hike of additional Dearness Allowance for CG Employees and Pensioners with effect from 1st July 2021.

How to Calculate DA and Arrears for Govt Employees? 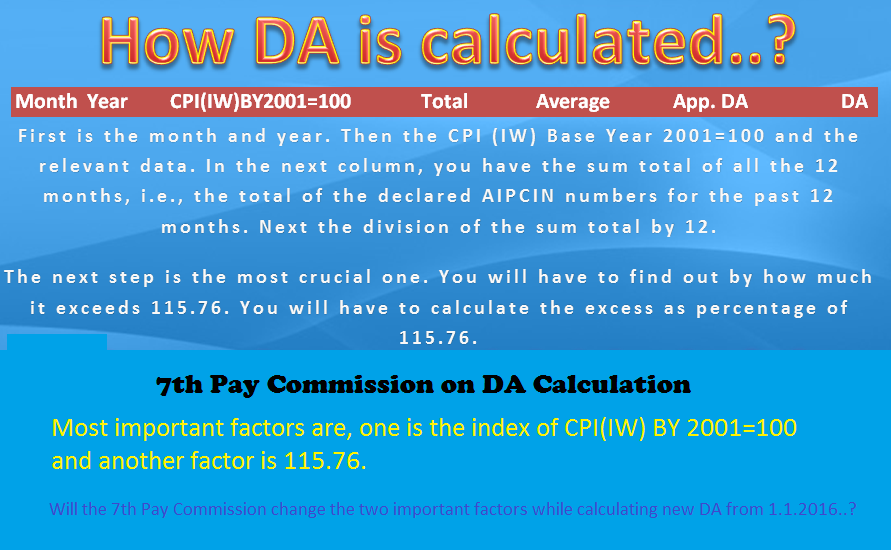 What is the meaning of Freezing of Dearness Allowance?

What is DA in salary?

The DA (Dearness Allowance) is the major element in the salary structure of Government employees. This increment is given twice in a year for compensating the price of essential commodities. [Click to view in detail]

How to calculate Dearness Allowance (DA) in Salary?

How to Calculate DA and DR Percentage of CG Employees and Pensioners?

Dearness allowance is calculated based on All India Consumer Price Index for Industrial Workers Base Year 2001=100. The index has been released by the Labour Bureau for every month.

For example, If we calculate the DA for the month of January 2018, we need 12 months of AICPIN data from January 2017 to December 2017. Now see the table, how da is calculated:

How to Calculate DA on Basic Pension for Central Government Pensioners

How to Calculate DA for Defence Personnel

The calculation of DA is same for Defence Forces Personnel at par with Central Government Employees. But the order will be issued by the concern ministry.

What is difference between DA and DR?

What is the meaning of ‘DA Freeze’?

After implemented an important order issued by the Finance Ministry under the title of “Freezing of Dearness Allowance and Dearness Relief” on 23rd April 2020, all Central Government pensioners including Railways are wishing to know their total contribution to the Govt. [Click to read full story]

What are the 7th CPC’s Recommendations Regarding Dearness Allowance?

Dearness Allowance is one of the important issues that the Pay Commission deals with.

The calculation method that was recommended by the 6th Pay Commission was radically different from the ones suggested by all the previous Pay Commissions.

Dearness Allowance, which was increasing by 1 or 2% until the 5th Pay Commission suddenly shot up to double-digit numbers. Until the 5th CPC, the All India Consumer Price Index Number for Industrial Workers 1982 = 100 was used for calculating dearness allowance. From the 6th Pay Commission onwards, CPI (IW) 2001 = 100 was used for calculating the DA.

The Commission assuming that the rate of Dearness Allowance would be 125 percent at the time of implementation of the new pay.

The Dearness Allowance (DA) is paid to Central Government employees to adjust the cost of living and to protect their Basic Pay from erosion in the real value on account of inflation. Presently, DA is based on the All India Consumer Price Index (Industrial Workers).

The JCM-Staff Side has suggested that the existing formula for the calculation of DA may continue.

See also: DA Rates from January 2016 to till date table

Analysis and Recommendations: The VI CPC had recommended that the National Statistical Commission may be asked to explore the possibility of a specific survey covering government employees exclusively, so as to construct a consumption basked representative of government employees and formulate a separate index. This has, however, not been done.

Keeping in mind that the present formulation of DA has worked well over the years, and there are no demands for its alteration, the Commission recommends continuance of the existing formula and methodology for calculating the Dearness Allowance.

Latest News on DA and DR: 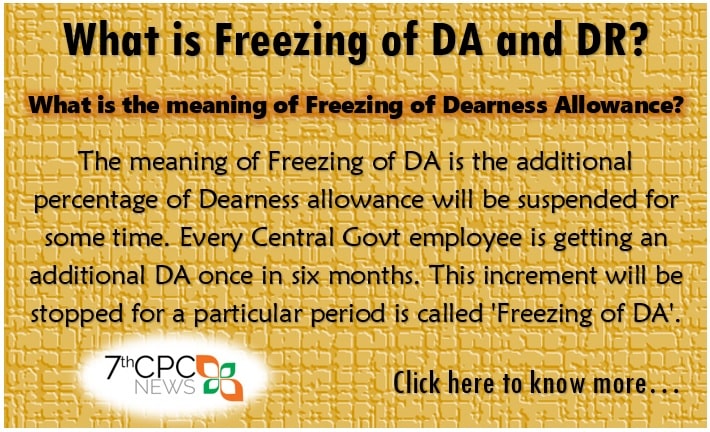