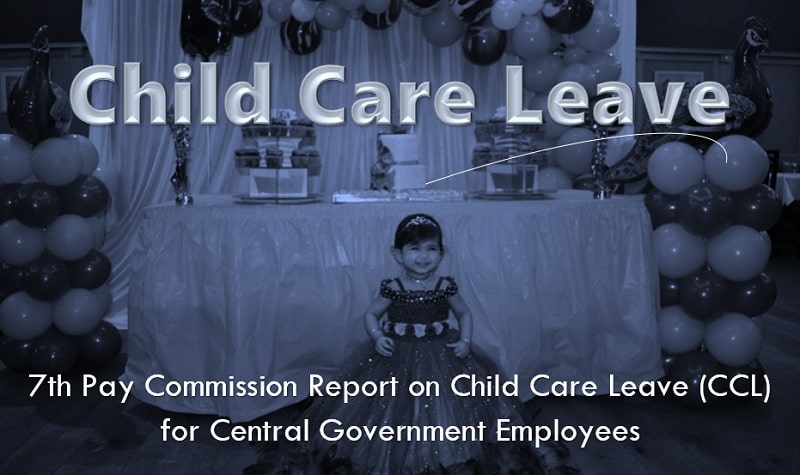 Child Care Leave or CCL is granted to women employees for a maximum period of two years (730 days) during their entire service for taking care of their minor children (up to eighteen years of age). There are several demands relating to Child Care Leave which include converting the same into “family care” leave, extending the facility to male parents and many representations stressing that it should be extended at least to single male parents.

Suggestions have also been received that in cases where the child is differently-abled, the clause stipulating that the child should be minor, should be done away with. Single mothers have highlighted their unique problems and requested the Commission for liberalizing the grant of Child Care Leave. Interestingly, representations have also been made for discontinuance of the Child Care Leave, primarily on the grounds that it disrupts office working and also because it promotes gender discrimination.

When Child Care Leave was first introduced by the VI CPC it generated considerable interest as it represented a positive measure benefiting women employees. It also took a while to stabilize and it is seen that as many as five amendments/clarifications were issued within a short period of time. As it stands, it is meant for women employees “for taking care of up to two children whether for rearing the children or looking after their needs like examination, sickness etc.”

It is treated akin to Earned Leave and is sanctioned as such. It may not, however, be granted in more than three spells in a calendar year. In the first two years of its implementation, the experience was that women employees tended to treat this as Casual Leave or an extension of the same, and the resultant frequent absences caused disruptions at work.

To address this, in September 2010, a clarification was issued stipulating that CCL may not be granted in more than three spells in a calendar year and also that it may not be granted for less than 15 days at a time. However, the latter stipulation was subsequently withdrawn and as per the latest clarification issued on 5 June 2014 the government has decided to remove the requirement of minimum period of 15 days Child Care Leave.

It has been brought to the notice of the Commission that the capping of maximum three spells in a calendar year has, to some extent, addressed the problems relating to disruption of work. Notwithstanding that, in the course of discussions with various stakeholders, the sense that has come across is that what was introduced as a welfare measure to help employees in times of need, is seen as a benefit that has to be availed simply because it exists.

There is, therefore, a palpable need to bring in some inhibiting feature so as to ensure that only genuinely affected employees avail of this scheme. Towards this end, the Commission recommends that Child Care Leave should be granted at 100 per cent of the salary for the first 365 days, but at 80 per cent of the salary for the next 365 days. In making this recommendation the Commission has also kept in mind the fact the concept of a paid (whether 100% or 80%) leave solely for child care for a period of two years, is a liberal measure unmatched anywhere else.

The Commission notes that in the event a male employee is single, the onus of rearing and nurturing the children falls squarely on his shoulders. Hence extension of CCL to single male parents is recommended. Moreover, the Commission recognizes the additional responsibility on the shoulders of employees who are single mothers. Accordingly, it is Report of the Seventh CPC 365 Index recommended that for such employees, the constitutionality of three spells in a calendar year should be relaxed to six spells in a calendar year.

What is the purpose of CCL?

Single Male Employees working in Central Government Services and having up to two dependent children will be entitled to 730 Days CCL during their entire service. Child Care Leave for Fathers in Central Govt Employees – Gazette Notification issued by DoPT on 11 December 2018 [Click to view the order]