You are here: Home / 7th CPC Fitment Factor | Fitment Table and Calculation
7th Pay Commission Fitment Factor 2.57
The fitment factor is a key element for fixing the basic salary after pay commission. The 6th CPC recommended the fitment ratio was 1.86. Now, the 7th Pay Commission has recommended a common fitment benefit for all groups of Central Government employees is 2.57.

How to Calculate Fitment Factor in 7th CPC?

What is the Fitment Factor?

A fitment factor is a unique number recommended by the pay commission used for calculating from pre-revised pay to revised pay. The revision of Basic Salary (Basic Pay) by the specific element is the Fitment Factor.

The Fitment Factor benefit is common for all groups of employees working in Central Government Services. The 6th Pay Commission had recommended 1.86 as a fitment factor and the 7th pay commission recommended 2.57.

How to calculate the fitment factor with basic pay?

If an employee drawing basic pay Rs. 15,500 in 4200 Grade Pay, his/her pay will be fixed as per the recommendations of the 7th pay commission as follows:

His pay will be fixed at Rs. 39,900 (equal to or higher than the cell value of the result in the pay matrix level 6).

The multiplication Factor and Fitment Formula is 2.57

What is the Fitment Formula?

The meaning fitment formula is a linking factor of the method for revising the pay (Basic Scale) on the recommendation of the pay commission. Conversion of revised pay from pre-revised pay as per the recommendations of the pay commission formula is based on the fitment formula. The magic number is a more important reason that the minimum and starting basic scale will be fixed by this factor.

How fitment factor is working?

Multiply the fitment factor with the current basic pay and the result is revised pay. For example, an employee drawing a basic pay of Rs. 20,500 (Grade Pay 4600) and his pay will be fixed in the pay matrix table given below:

What is the meaning of the Fitment Factor or Fitment Table or Fitment Benefit?

The fitment Factor is a common multiplication number, which is used for arriving at a common result on a new pay scale after the implementation of a new pay commission.

The starting point for the first level of the matrix has been set at 18,000. This corresponds to the present starting pay of 7,000, which is the beginning of PB-1 viz., 5200 + GP 1800, on the date of implementation of the VI CPC recommendations.

Hence the starting point now proposed is 2.57 times what was prevailing on 01.01.2006. This fitment factor of 2.57 is being proposed to be applied uniformly to all employees.

The starting point of a Sepoy (and equivalent), the entry-level personnel in the defence forces, has been fixed in the Defence Pay Matrix at 21,700. The starting point in the existing pay structure is 8,460 for a Sepoy/equivalent.

The fitment in the new matrix is essentially multiple factors of 2.57. This multiple is the ratio of the new minimum pay arrived at by the Commission (18,000) and the existing minimum pay (7,000). The fitment factor is being applied uniformly to all employees.

It includes a factor of 2.25 to account for DA neutralization, assuming that the rate of Dearness Allowance would be 125 percent at the time of implementation of the new pay as of 01.01.2016. The actual raise/fitment being recommended by the Commission is 14.29 percent. An identical fitment of 2.57 has also been applied to the existing rates of Military Service Pay (MSP), applicable to defence forces personnel only.

Hence the starting point now proposed is 2.57 times what was prevailing on 01.01.2006. This fitment factor of 2.57 is being proposed to be applied uniformly to all employees.

An exception to this approach has been made in the case of Brigadiers/equivalents where pay for the rank has been arrived at as per the fitment table notified by the Ministry of Defence through its Special Army Instructions of October 2008.

7th Pay Commission Fitment Table: National Council JCM Staff Side suggested in their memorandum regarding the fitment formula as follows…

The fitment formula suggested by all the earlier Pay Commissions was not reflective of the actual revision of wages. The employees who were on rolls on the date of implementation of the Commission’s recommendation comparatively received lesser benefits than the new entrants.

Amongst the existing employees also, more benefits accrued to persons with lesser service period. This happened due to the rejection of the demand of the Staff Side to have a point-to-point fixation.

The anomalous situation was addressed during the discussion the Staff Side had with the Group of Ministers in September 1997, over the implementation of the recommendations of the 5th CPC.

In place of 20% of the basic pay recommended by the 5th CPC as a fitment formula, the Staff Side could negotiate and settle it at 40%. The said agreement brought about near total satisfaction over the revision benefits amongst all sections of employees.

The said 40% benefit brought about a uniform multiplication factor too.

Taking these into consideration, we suggest that the multiplication factor (26000/7000 = 3.7) may be applied uniformly in all the cases to arrive at the revised pay in the new scale of pay.

Fitment Table of the 7th Pay Commission for Pensioners: There is no separate fitment table for pensioners in the 7th pay commission report. The fitment factor is commonly 2.57 used for revision of pay and pension.

The index of Rationalisation is slightly varied from the Fitment Factor recommended by the 7th Pay Commission. IoR is used for calculating the entry pay in the new pay commission.

An ‘index of rationalization has been applied while making enhancement of levels from Pay Band 1 to 2, 2 to 3, and 3 onwards on the premise that role, responsibility, and accountability increase at each step in the hierarchy. At the existing PB-1, this index is 2.57, increasing to 2.62 for personnel in PB-2 and further to 2.67 from PB-3.

Recognizing the significantly higher degree of responsibility and accountability at levels corresponding to Senior Administrative Grade, the entry pay is recommended for enhancement by a multiple of 2.72. The same multiple is also being applied at the HAG and HAG+ levels.

At the apex level, the index applied is 2.81 and for the Service Chiefs/Cabinet Secretary, the index has been fixed at 2.78.

The matrix of the rationalization index applied at this level has been fixed at 2.57, lower than the index of 2.67 applied to existing PB-3 officers. A similar formulation has necessarily to be applied to the defence pay matrix since the Lieutenant Colonels also received a marked increase in their pay level, post VI CPC recommendations.

Since the defence services have an additional level in the existing PB-4 and there is a common pay level for SAG level officers in Defence and Civil, the Commission has applied the rationalization index of 2.57 also to the officers in the rank of Colonel and Brigadier and their equivalent.

Index of Rationalization for Pay Levels 1 to 5

Index of Rationalization for Pay Levels 5 to 9

Index of Rationalization for Pay Levels 10 to 12

Index of Rationalization for Pay Levels 13 to 14

Index of Rationalization for Pay Levels 15 to 18 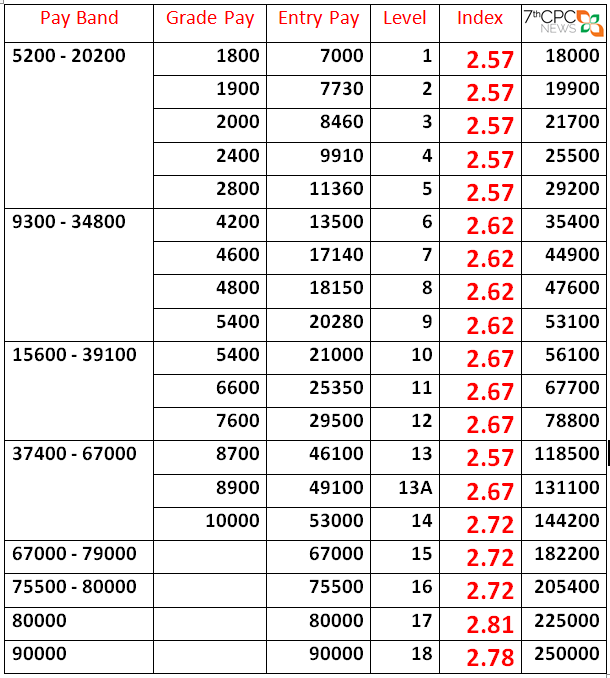 When an employee joins Central Government Services, the initial pay fixation has been done for determining the first-month salary. The new pay fixation on initial as per rule 7 of CCS (RP) Rules 2016.

When an employee gets a promotion his pay will be fixed as per the method of calculation prescribed by rule 13 of CCS (Revised Pay) Rules.

When an employee is eligible for an annual or promotional increment, his pay will be fixed as per the latest revised pay rules.

How calculates the fitment factor in the 7th CPC?

After the implementation of the 7th pay commission, the old basic pay multiplies with the fitment factor of 2.57 and matches the basic salary in the pay matrix table according to their pay level.