You are here: Home / GPF Interest Calculator for CG Employees

Interest rates are applicable for three months from April to June, July to September, October to December and January to March. Our tool is designed to edit the interest rates also. (Interest rates for 2018-19 are shown in the calculator). This tool not showing results as in the excel sheet format, this is simple software working with javascript. 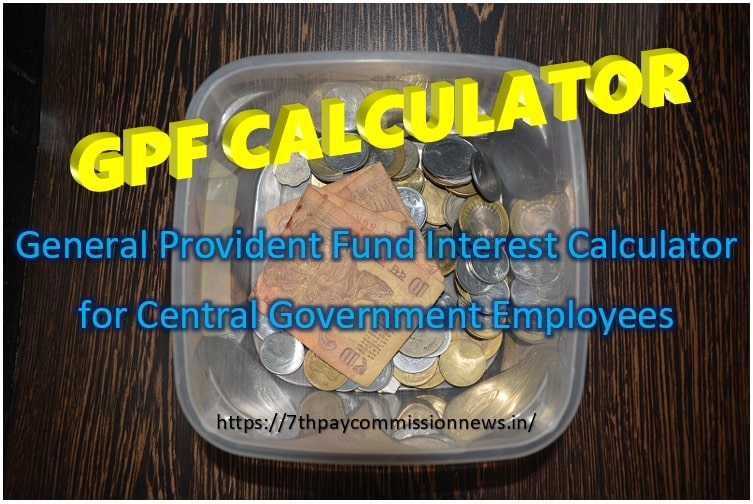 When a subscriber retiring from his service, repay the Fund for credit to his account, the amount paid to him from the Fund in pursuance of this rule with interest thereon at the rate provided in Rule 11 in cash or securities or partly in cash and partly in securities, by instalments or otherwise, by recovery from his emoluments or otherwise, as may be directed by the authority competent to sanction an advance for the grant of which, special
reasons are required under sub-rule (2) of Rule 12.

What says the GPF Rule No. 11 on Interest?

11. Interest -(1) Subject to the provisions of sub-rule (5), Government shall pay to the credit of the account of a subscriber interest at such rate as may be determined for each year according to the method of calculation prescribed from time to time by the Government of India;

Provided further that a subscriber who was previously subscribing to any other Provident Fund of the Central Government and whose subscriptions, together with interest thereon, have been transferred to his credit in his Fund under Rule 35, shall also be allowed interest at 4 per cent, if he had been receiving that rate of interest under the rules of such other Fund under a provision similar to that of the first proviso to this rule.

(2) Interest shall be credited with effect from last day in each year in the following manner:-

(i) on the amount to the credit of a subscriber on the last day of the preceding year, less any sums withdrawn during the current years – interest for twelve months;

(iii) on all the sums credited to the subscriber’s account after the last day of the preceding year – interest from the date of deposit up to the end of the current year;

(iv) the total amount of interest shall be rounded to the nearest whole rupee (fifty paise counting as the next higher rupee):

Provided that when the amount standing to the credit of a subscriber has become payable, interest shall thereupon be credited under this rule in respect only of the period from the beginning of the current year or from the date of deposit, as the case may be, up to the date on which the amount standing to the credit of the subscriber became payable.

Provided that where there has been delay in the drawal of pay or leave salary and allowances of a subscriber and consequently in the recovery of his subscription towards the Fund, the interest on such subscriptions shall be payable from the month in which the pay or leave salary of the subscriber was due under the rules, irrespective of the month in
which it was actually drawn:

Provided further that in the case of an amount forwarded in accordance with the proviso to sub-rule (2) of Rule 10, the date of deposit shall be deemed to be the first day of the month if it is received by the Accounts Officer before the fifteenth day of that month:

Provided further that where the emoluments for a month are drawn and disbursed on the last working day of the same month, the date of deposit shall, in the case of recovery of his subscriptions, be deemed to be the first day of the succeeding month.

Provided that where the Accounts Officer has intimated to that person (or his agent) a date on which he is prepared to make payment in cash, or has posted a cheque in payment to that person, interest shall be payable only up to the end of the month preceding the date so intimated, or the date of posting the cheque, as the case may be:

Provided further that where a subscriber on deputation to a body corporate, owned or controlled by the Government or an autonomous organization registered under the Societies Registration Act, 1860 (21 of 1860), is subsequently absorbed in such body corporate or organization with effect from a retrospective date, for the purpose of calculating the interest due on the Fund accumulations of the subscriber, the date of issue
of the orders regarding absorption shall be deemed to be the date on which the amount to the credit of the subscriber became payable subject, however, to the condition that the amount recovered as subscription during the period commencing from the date of absorption and ending with the date of issue of orders of absorption shall be deemed to be subscription to the Fund only for the purpose of awarding interest under this sub-rule.

NOTE.- Payment of interest on the Fund balance beyond a period of 6 months may be authorized by-

(b) the immediate superior to the Head of Accounts Office (which expression includes a Controller of Accounts, where there is one or the Financial Adviser to the concerned Administrative Ministry or Department) up to any period;

after he has personally satisfied himself that the delay in payment was occasioned by circumstances beyond the control of the subscriber or the person to whom such payment was to be made, and in every such case the administrative delay involved in the matter shall be fully investigated and action, if any required taken.

(5) Interest shall not be credited to the account of a subscriber if he informs the Accounts Officer that he does not wish to receive it; but if he subsequently asks for interest, it shall be credited with effect from the first day of the year in which he asks for it.

(6) The interest on amounts which under sub-rule (3) of Rule 10, Rule 31 or Rule 32 are replaced to the credit of the subscriber in the Fund, shall be calculated at such rates as may be successively prescribed under sub-rule (1) of this rule and so far as may be in the manner described in this rule.

(7) In case a subscriber is found to have drawn from the Fund an amount in excess of the amount standing to his credit on the date of the drawal, the overdrawn amount, irrespective of whether the overdrawal occurred in the course of an advance or a withdrawal or the final payment from the Fund, shall be repaid by him with interest thereon in one lump sum or in default, be ordered to be recovered, by deduction in one lump sum, from the emoluments of the subscriber. If the total amount to be recovered is
more than half of the subscriber’s emoluments, recoveries shall be made in monthly instalments of moieties of his emoluments till the entire amount together with interest is recovered. For this sub-rule, the rate of interest to be charged on overdrawn amount would be 2 ½% over and above the normal rate on Provident Fund balance under subrule(1). The interest realized on the overdrawn amount shall be credited to Government
account, under a distinct sub-head “Interest on overdrawals from Provident Fund” under the Head “049-Interest Receipts-C-Other interest receipts of Central Government – Other Receipts”.