You are here: Home / Travelling Allowance as per 7th CPC

Travelling Allowance (TA) on Retirement: Time-limit for submission of claims for TA on Retirement is modified from 60 days to 180 days (six months), succeeding the date of completion of the journey – Finance Ministry Orders on 15th June 2021 – Click to read more

A reimbursement system for travelling expenses while on duty (official duty or temporary duty). And any kind of travelling expenses is permissible as per entitlements of TA/DA Rules. Other than travel expenses, accommodation, food and other related expenses are also eligible for reimbursement under Daily Allowance. The revised rates of TA and DA allowances after the 7th pay commission are given below in detail.

This Allowance on tour comprises fares for a journey by rail/road/air/ sea or road mileage for road journeys otherwise than by bus and Daily Allowance for the period of absence from Headquarters [Para 4.2.27 6th CPC Report]

Note: The Rates of Accommodation Charges, Travelling Charges, and Lump sum amount will further increase by 25% whenever DA increases by 50%.

Clarification on accommodation charges for stay in Hotels as per CCS (TA) Rules – Dated: 18.6.2018 – Click to read in detail

For levels 8 and below, the amount of claim (up to the ceiling) may be paid without the production of vouchers against self-certified claims only. The self-certified claim should clearly indicate the period of stay, name of dwelling, etc. additionally, for a stay in Class ‘X’ cities, the ceiling for all employees up to Level 8 would be Rs. 1,000 per day, but it will only be in the form of reimbursement upon production of relevant vouchers.

The self-certified claim should clearly indicate the period of travel, vehicle number, etc. the ceiling for levels 11 and below will further rise by 25 per cent whenever DA increases by 50 per cent. For journeys on foot, an allowance of Rs.12/- per kilometre travelled on foot shall be payable additionally.

Absence from Head Quarter will be reckoned from midnight to midnight and will be calculated on a per-day basis.

Transportation of personal effects on transfer by road calculation. Transportation entitlement for Central Government employees with effect from 1.7.2017

Rate of transportation of conveyance on transfer

The travelling allowance referred to will be admissible in respect of the journey of the Government servant and members of his family from the last station of his duty to his home town or to the place where he and his family is to settle down permanently even if it is other than his declared home town and in respect of the transportation of his personal effects between the same places.

S.R. 147 the expenditure on transportation of conveyance by government servants on their retirement shall be reimbursed without insisting on the requirement that the possession of the conveyance by them while in service at their last place of duty should have been in the public interest. Finance Ministry issued an important clarification order on Travelling Allowances rules and rates as per 7th Pay Commission on 13.7.2017. [Download pdf click here]

(a) The Composite Transfer Grant shall be paid at the rate of 80% of the last month’s basic pay in case of those employees, who on retirement, settled down at places other than the last station(s) of their duty located at a distance of or more than 20 km.

(b) As in the case of serving employees, Government servants who, on retirement, settle at the last station of duty itself or within a distance of less than 20 km may be paid one-third of the CTG subject to the condition that a change of residence is actually involved.

(iii) Transportation of Personal Effects:- Same as Para 3(iii) above.

Who is eligible for Travelling Allowance?

Particulars of an employee

Part-B (To be filled in the Bills Section)

Note: This bill should be prepared in duplicate-one for payment and the other as an office copy

The time limit for submission of TA claim in all other cases i.e. on tour, transfer and training etc. will remain 60 days. [Click to view in order] 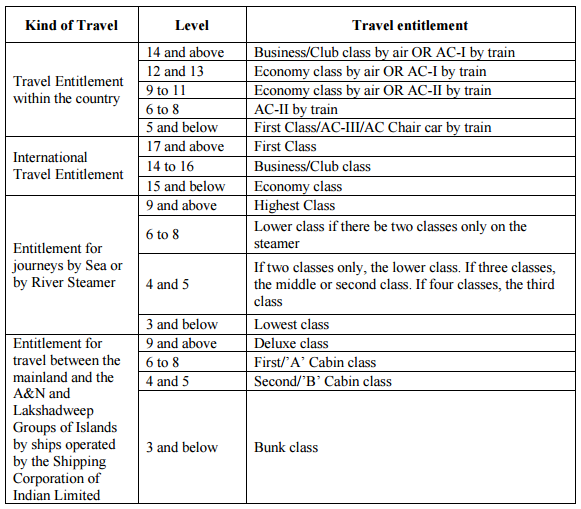 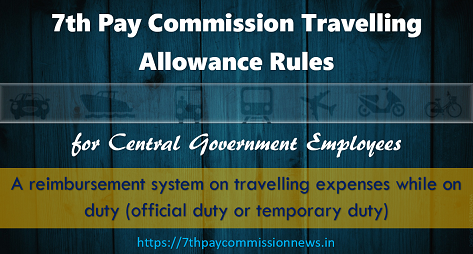 What is Travelling Allowance for Govt employees?

Granting of Travelling Allowance for Central Government employees is based on the travel expenses including boarding and lodging expenses while on official duty.

What is the difference between Travelling Allowance and Transport Allowance?

What is the accommodation charges for pay level 5 as per 7th CPC?

The accommodation charges for pay levels 1 to 5 are Rs. 450 per day after implementation of the 7th pay commission.