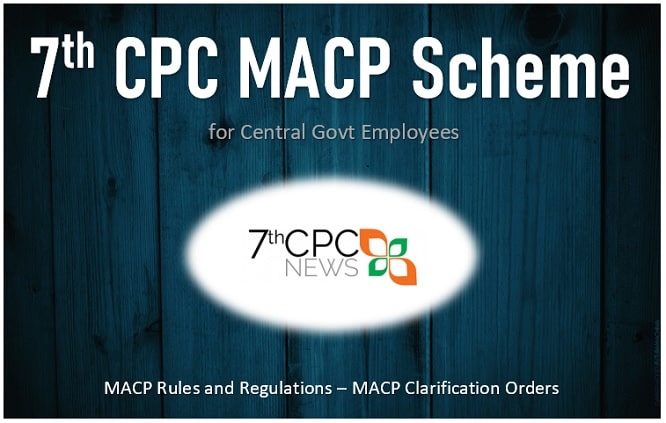 MACP Screening Committee: Promotional plans for the employees who are not getting promotion long period in Central Government Services

Table of Contents hide
7th Pay Commission Modified Assured Career Progression Scheme (MACP Scheme) for the Central Government Civilian Employees
MACP Rules Regulations
MACP Screening Committee
Latest clarification on MACP Scheme
MACP to Station Master in Railways
DoPT Orders on CCS Rules
What is the difference between ACP and MACP?
Is MACP a promotion?
What is MACP?
What is the benefit of MACP?
Who are eligible for MACP?
What is the MACP Rule?
What is MACP in the 7th pay commission?
How to download the consolidated guidelines on MACP?

ACP and MACP Schemes are Promotional Schemes for Central Government Employees. ACP was introduced by the 5th Central Pay Commission and MACP was further modified the earlier scheme of ACP and recommended by 6th CPC.

While addressing this aspirational need, we are also conscious of the fact that such employees who have outlived their utility, their services need not be continued, and the continuance of such persons in the system should be discouraged. Pay Fixation on Promotion after 1.1.17.

Although a number of demands were received for increasing the frequency of MACP as well as to enhance the financial benefit accruing out of it, this Commission feels that the inherent issues in the existing pay structure owing to which there was widespread resentment have been set justify by way of rationalisation of pay levels, the abolition of pay band and grade pay and introduction of a matrix-based open pay structure.

Hence, there is no justification for increasing the frequency of MACP and it will continue to be administered at 10, 20 and 30 years as before.

In addition, the introduction of more stringent criteria such as clearing of departmental examinations or mandatory training before grant of MACP can also be considered by the government. Dopt latest orders on MACP.

MACP: In almost all the memoranda received in the Commission, the inadequacy of the benefit accruing from the present MACP formulation has been underscored. 3rd MACP When Two Promotions earned.

Comparisons are also made of the MACP introduced post-VI CPC with the ACP scheme introduced post-V CPC. In the case of earlier ACP scheme, although it was available with lesser frequency i.e., after the passage of 12 and 24 years of service, the upgrade that was given was in the promotional hierarchy. Benchmark for MACP Financial Upgradation Clarification.

Withholding Annual Increments of Non-performers after 20 Years: There is a widespread perception that increments, as well as upward movement in the hierarchy, happen as a matter of course.

The Commission is, therefore, proposing withholding of annual increments in the case of those employees who are not able to meet the benchmark either for MACP or a regular promotion within the first 20 years of their service.

7th CPC MACP Illustration: Suppose, Ms ABC, who, after having been fixed in the Pay Matrix, is drawing a Basic Pay of Rs.28,700 in Level 4. She is upgraded to Level 5 (either regular promotion or through MACP). Then her salary will be fixed in the following manner…

Cases of persons holding higher posts purely on ad hoc basis shall also be considered by the Screening Committee along with others. They may be allowed the benefit of financial up-gradation on reversion to the lower post or if it is biennial vis-à-vis the pay drawn on ad hoc basis.

It was the recognition of the lack of promotional avenue in the subordinate services that made the 5th CPC recommend a time bound two career progression scheme.

The discontent amongst the employees in the matter is of high magnitude today. The VII CPC, therefore, should recommend that the cadre reviews are undertaken wherever not done sofar to ensure five hierarchical promotions to all employees in their career on the pattern obtaining for Group A Officers.

The Central Government employees, who are all in continuous service of ten years and above without promotion they are eligible under the MACP Scheme.

The fixation of revised all salary elements according to the higher grade is called pay fixation. 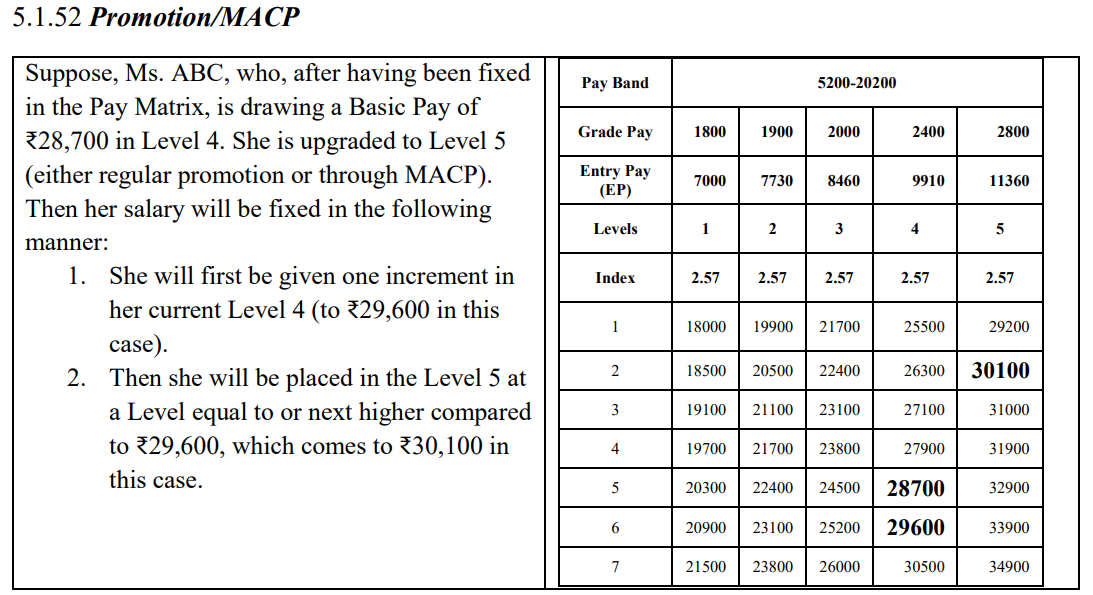 Of course, initially, provision of financial benefit with upgradation in grade. However, after getting regular promotion it will be regularized.

The full form of MACP is ‘Modified Assured Career Progression Scheme’ recommended by the 6th Pay Commission. MACP is also a promotional scheme for Central Government employees. It is just a modified and upgraded scheme of ACP.

Salary increment in the name of promotion. Those who are not getting any promotion in 10, 20 and 30 years of service, will get promotional benefit under MACP Scheme.

Those who are not getting any promotion in 10, 20, and 30 years of continuous service, eligible for financial upgradation under this scheme.

MACP rule only adopts those who have not promoted in ten, twenty, and thirty years of their long service. Without any promotion in ten years of continuous service, will get the next higher grade with all financial benefits.

The 7th pay commission recommended the most expected demand of the Central Govt employees of promotion on pay hierarchy, not in the grade pay system. Before 7th CPC the financial benefit of under the scheme was on Grade Pay hierarchy only. Now, the Central Govt had accepted and implemented the major recommendation of financial upgradation that should be given on the individual of the pay hierarchy system.