You are here: Home / Department of Posts / Officials who declined ad-hoc LSG promotion are eligible for financial upgradation under MACP

In partial modification to this olfice memo of even number dated 03.06.2020, the following instructions issued stunds deleted.

* The above officials, who have declined their adhoc promotion offered vide this office memo of even number dated 09.03.2020 will be debarred for promotion to LSG (Postal) cadre for a period of one year from heir respective date of declination.

In addition to the above, the above noted officials will be debarred from any financial upgradation till they accept regular promotion to LSG (Postal) cadre.”

Deletion of above condition will make the official eligible for LSG promation and financial upgradation under MACP.

This issues with the approval of the Competent Authority.

Copy of this memo is issued for information and necessary action to:-
1. The Postmaster General, Berhampur/ Sambalpur Region.
2. The Director of Accounts (Postal), Cuttack.
3. All the SSPOs/SPOs of Odisha Circle.
4. The Asst. Director (TO), Circle Office, Bhubaneswar
5. All Sr. Postmaster/ Postmaster of Odisha Circte.
6. The officials concemed.
7. Office copy. 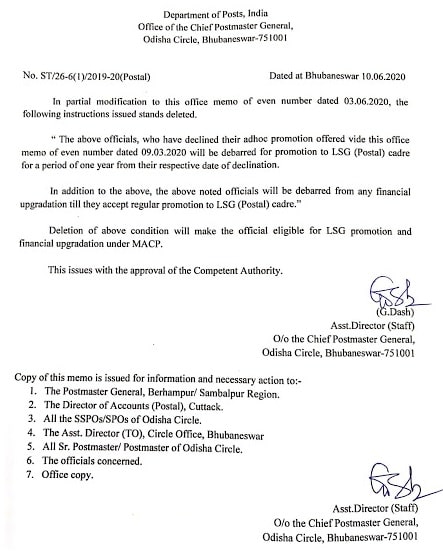