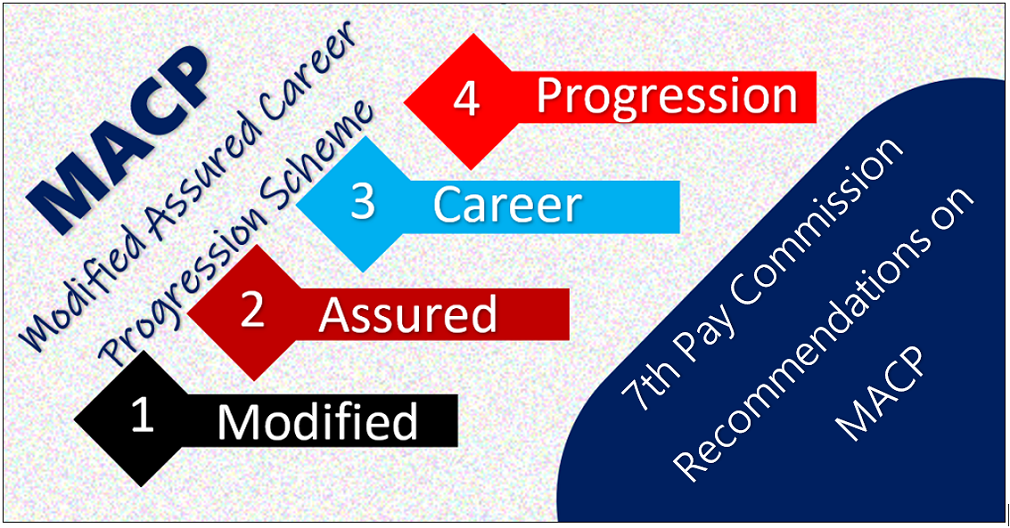 7th Pay Commission Recommendations on MACP: The Modified Assured Career Progression (MACP) scheme has been further modified. It is expected that the present formulation will address the widespread dissatisfaction prevailing in the earlier system, in which the gain or progression through the MACP was considered inadequate. The remuneration package is such that employees would feel that they are valued and they are fairly paid and their remuneration is not less than a person who is similarly situated in another organisation. While addressing this aspirational need, we are also conscious of the fact that such employees who have outlived their utility, their services need not be continued, and the continuance of such persons in the system should be discouraged.

Modified Assured Career Progression (MACP) : Although a number of demands were received for increasing the frequency of MACP as well as to enhance the financial benefit accruing out of it, this Commission feels that the inherent issues in the existing pay structure owing to which there was widespread resentment have been set justify by way of rationalisation of pay levels, abolition of pay band and grade pay  and introduction of a matrix based open pay structure. Hence, there is no justification for increasing the frequency of MACP and it will continue to be administered at 10, 20 and 30 years as before. In the new Pay matrix, the employees will move to the immediate next level in the hierarchy. Fixation of pay will follow the same principle as that for a regular promotion in the pay matrix. MACP will continue to be applicable to all employees up to HAG level except members of Organised Group `A’ Services where initial promotions up to NFSG are time bound and hence assured.

There is, however, one significant aspect where this Commission feels that a change is required. This is with regard to the benchmark for performance appraisal for MACP as well as for regular promotion. The Commission recommends that this benchmark, in the interest of improving performance level, be enhanced from ‘Good’ to ‘Very Good.’ In addition, introduction of more stringent criteria such as clearing of departmental examinations or mandatory training before grant of MACP can also be considered by the government.

MACP : In almost all the memoranda received in the Commission, the inadequacy of the benefit accruing from the present MACP formulation has been underscored. As per the existing dispensation, upward movement in this scheme is through the grade pay hierarchy and the financial benefit as a result of this progression is equivalent to one increment plus the difference in grade pay between the existing and next level. It has been stated by employees that this amount is very meagre especially when the difference in grade pay is as low as ₹100. Further, progression through the MACP scheme can take place only when ten years have lapsed after the previous promotion/MACP upgrade, making the position even starker.

Comparisons are also made of the MACP introduced post VI CPC with the ACP scheme introduced post V CPC. In the case of earlier ACP scheme, although it was available with lesser frequency i.e., after the passage of 12 and 24 years of service, the upgrade that was given was in the promotional hierarchy. Therefore the monetary benefit to the employee was sizeable as compared to that under the present MACP. Numerous demands have therefore been received in the Commission to rationalize the progression of grade pay, to increase the frequency of administering MACP and to make the progression follow the promotional instead of the grade pay hierarchy.

Withholding Annual Increments of Non-performers after 20 Years: There is a widespread perception that increments as well as upward movement in the hierarchy happen as a matter of course. The perception is that grant of MACP, although subject to the employee attaining the laid down threshold of performance, is taken for granted. This Commission believes that employees who do not meet the laid down performance criterion should not be allowed to earn future annual increments.
The Commission is therefore proposing withholding of annual increments in the case of those employees who are not able to meet the benchmark either for MACP or a regular promotion within the first 20 years of their service. This will act as a deterrent for complacent and inefficient employees. However, since this is not a penalty, the norms for penal action in disciplinary cases involving withholding increments will not be applicable in such cases. This will be treated as an “efficiency bar”. Additionally, for such employees there could be an option to leave service on similar terms and conditions as prescribed for voluntary retirement. [Para 5.1.46 in 7th CPC Report] MACP Illustration:
Suppose, Ms. ABC, who, after having been fixed in the Pay Matrix, is drawing a Basic Pay of Rs.28,700 in Level 4. She is upgraded to Level 5 (either regular promotion or through MACP). Then her salary will be fixed in he following manner…
1. She will first be given one increment in her current Level 4 (to Rs.29600 in this case).
2. Then she will be placed in the Level 5 at a Level equal to or next higher compared to Rs.29600, which comes to Rs.30,100 in this case.

For the efficient functioning of an institution, the primary pre-requisite is to have a contended workforce. It is not only the emoluments, perks and privileges that motivate an employee to give his best. They are no doubt important. But what is more important is to provide them a systematic career progression.

Persons who were recruited to subordinate services were able to climb to Managerial positions over a period of time. The situation underwent vast changes in the last two decades. In most of the Departments, stagnation has come to stay. It takes decades to be promoted to the next higher grade in the hierarchy. It was the recognition of the lack of promotional avenue in the subordinate services that made the 5th CPC to recommend a time bound two career progression scheme. The three time bound scheme of MACP instead of improving the situation has been found less beneficial and has therefore not gone to address the inherent problem of de-motivation that has crept in due to the high level of stagnation.

In most of the Departments, the exercise of cadre review which was considered important was not carried out. Any attempt in this regard was restricted to Group A services. The discontent amongst the employees in the matter is of high magnitude today. The VII CPC therefore, should recommend that the cadre reviews are undertaken wherever not done sofar to ensure five hierarchical promotions to all employees in their career on the pattern obtaining for Group A Officers.