You are here: Home / DA Merger / National Council Staff Side JCM meets today (11.12.2014) – Eyes of all look expectantly on the demand of DA Merger and Interim Relief

National Council Staff Side JCM meets today (11.12.2014) – Eyes of all look expectantly on the demand of DA Merger and Interim Relief

National Council Staff Side JCM organise a National Convention today at New Delhi. All major federations including Railway, Defence and Confederation will participate in the convention. Convention will adopt a joint declaration on future course of agitational programmes on the following demands of the Central Government Employees. The official report has been published through confederation blog as follows… 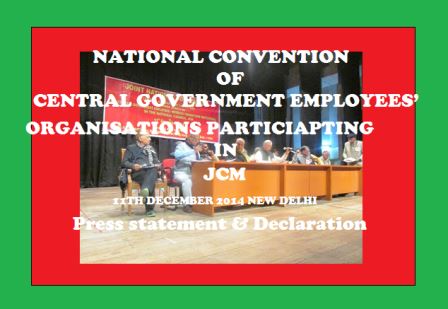 1. Effect of wage revision of Central Government Employees from 01.01.2014 accepting memorandum of staff side JCM, Grant interim relief and merger of 100% DA, Ensure submission of the 7th CPC report within the time frame of 18 months.

2. Include the Gramin Dak Sewaks within the ambit of the 7th CPC.

3. No privatization or FDI in Railways and Defence establishments.

4. No ban on recruitment/creation of Posts.

5. No outsourcing, contractorisation and privatization of government functions. Withdraw the proposed move to close down the printing presses, stationery offices and Medical Stores Depots. Regularise the existing daily rated/casual and contract workers.

7. No Labour reforms which are inimical to the interest of workers.

9. Revise the JCM functioning at all levels as an effective negotiating forum for settlement of the demands of the CGEs. 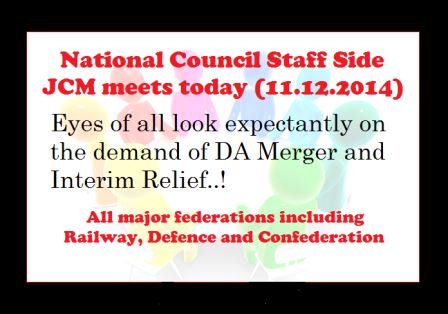