Holding of National Convention of the National Council (JCM) Staff Side 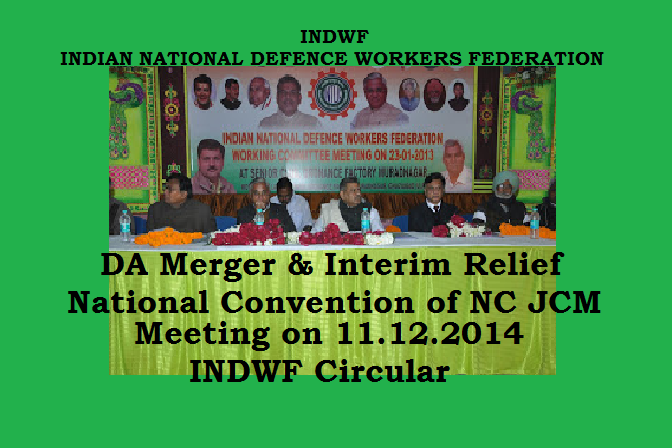 Important issues of DA Merger and Interim Relief to be discussed in the National Convention of NC JCM Meeting which will be held on 11.12.2014 – INDWF Circular

To
All Office Bearers and Working Committee Members,
INDWF

Dear Colleagues,
National Council (Staff Side) JCM for Central Government employees demanded and submitted a memorandum on Interim Relief and Merger of DA to the 7th CPC and also to the Ministry of Fiance.

The NDA Government has adopted the same plea made by the UPA II Government to reject our demands.

From the steps so far taken by the BJP Government, it is unambiguous that they would be pursuing the neo-liberal economic policies with much more intensity than even the UPA Government. Having got a clear majority in the Parliament, they would be able to push through necessary legislations to pursue reforms.

The outsourcing of Railway functions, privatisation/Corporatisation of Defence manufacturing units, increased FDI inflow in various core sectors of economy, dismantling of the administrative price mechanism, de-nationalisation efforts in the Banking, Insurance and coal sectors and above all the adherence to New Contributory Pension Scheme are some of the bold anti-workers steps taken by the New Government.

The National Council (Staff Side) when they met during October, 2014 at New Delhi it was unanimous opinion to pursue the issues through organizational methods. Accordingly, it was decided to hold a NATIONAL CONVENTION, eliciting the participation of the representatives of all Service organisations participating in the JCM to discuss the emerging situation and decide upon future course of action.

Incidentally, we must mention that the JCM conceived as a negotiating forum has been made in-effective by the Government over the years by not convening its meetings periodically.

150 Delegates from Defence Federations (INDWF and AIDEF) are permitted to participate.

Treat this as an important matter which will decide the issues of 7th CPC (merger of DA and IR) as well as present trend of the New Government on the future of Central Government Employees particulars about Defence Civilian Employees.