You are here: Home / AICPIN / Expected DA Calculator from Jan 2014

The calculation of expected dearness allowance is prediction only!

6 Months AICPIN (CPI_IW) need for the exact calculation of percentage of Dearness allowance from January 2014. 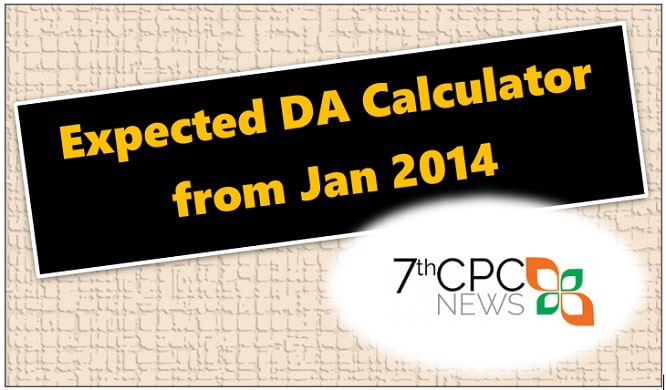 Updated news on the expected DA from Jan 2014

The total process of the DA percentage calculation is now over! The detailed calculation table is given below for your information:

AICPIN for the month of September 2013

According to a press release issued by the Labour Bureau, Ministry of Labour & Employment the All-India CPI-IW for September, 2013 rose by 1 points and pegged at 238 (two hundred and thirty eight). On 1-month percentage change, it increased by 0.42 per cent between August and September compared with 0.47 per cent between the same two months a year ago.

At centre level, Labac Sichar recorded the highest increase of 9 points each followed by Varanasi and Vishakhapattnam (7 points each) and Bhilwara, Tripura and Darjeeling (6 points each). Among others, 5 points rise was registered in 3 centres, 4 points in 2 centres, 3 points in 7 centres, 2 points in 14 centres and 1 point in 15 centres. On the contrary, Goa reported a decline of 8 points followed by Godavarikhani (7 points), Bhavnagar (5 points) and Nagpur and Ahmedabad (4 points each). Among others 3 point decline was observed in 2 centres 1 point in 6 centres. Rest of the 15 centres’ indices remained stationary.

The indices of 39 centres are above All-India Index and other 38 centres indices are below national average. The index of Ajmer centre remained at par with all-India index.

The next index of CPI-IW for the month of October, 2013 will be released on Friday, 29 November, 2013. The same will also be available on the office website www.labourbureau.gov.in.