DA Calculation from July to December 2017 is over! 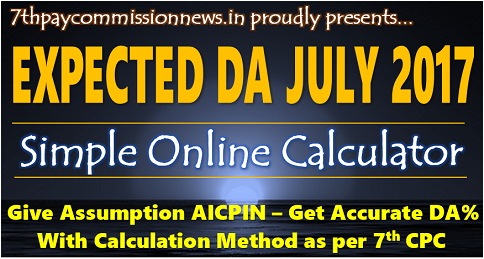 The detailed calculation table is given below, 5% additional DA is declared for Central Govt Employees and Pensioners.

Enter your expected AICPIN in the blank box and get the approximate DA %. And also, click the ‘+’ button to know the DA Calculation…

DA Calculator from July to Dec 2017 with Arrears

Expected Dearness Allowance for Central Government Employees and Pensioners from July 2017 as per the recommendations of 7th Central Pay Commission: This calculator gives an approximate percentage increase in Dearness Allowance with effect from July 2017 according to the input of your imaginary Consumer Price Index numbers for the months of March, April, May, and June.