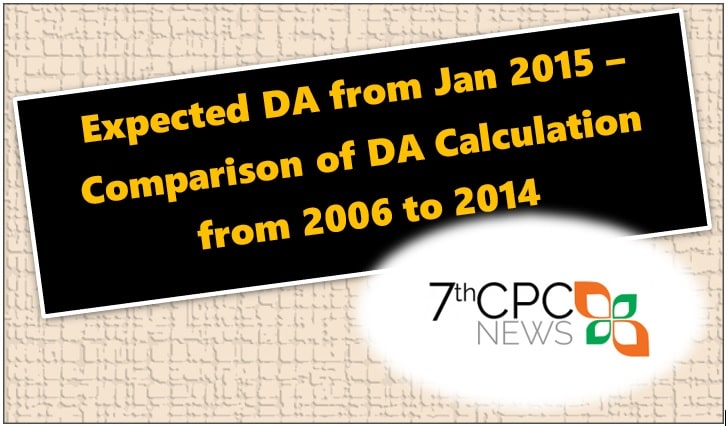 Calculation of Expected DA from January 2015

Updated News on DA from Jan 2015: The entire calculation process has been completed for 6 months from July 2014 to December 2014. As per the AICPIN statistics, the DA hike from 107 to 113% (6% increase). The below DA  and DR table for better understanding the calculation formula:

One of the most important department functioning under the Central Government is the Labour Bureau. The department releases a number of important statistics and conducts surveys. In the year 1872, the department had successfully conducted the population census of the entire country. This census gave not only the count of number of persons, but also the number of gainfully employed. Since then every census has thrown useful data on workers in different industries and occupations every 10 years. The bureau also releases official information, economic indicators like Consumer Price Index Numbers for Industrial, Agricultural and Rural Labourers; wage rate indices and data on industrial relations etc. that are followed by a number of government departments.

One such indicator is the monthly Consumer Price Index Numbers (Industrial Workers 2001=100), which is used to calculate the Dearness Allowance for Central Government employees. Prices of 24 essential commodities (from rice to bathing soap) are observed in 78 cities all over the country in order to calculate the average index of CPI(IW).

It is based on these statistics that, once every six months, the Centre announces Dearness Allowance for its employees. Based on the AICPIN(All India Consumer Price Index Numbers) between January and June, and between July and December, the Finance Ministry decides the percentage of hike in Dearness allowance and Dearness Relief according to the recommendations of 6th CPC and informs the Government. The Centre makes its decision after discussing the recommendation during the cabinet meeting.

Now, ‘Expected DA from Jan 2015′ is the first installment of next year and only three months’ data have been collected as of now, for the Dearness Allowance. Accurate D.A percentage can be calculated only after the remaining 3 months’ AICPIN points are announced.

But, we believe that based on October’s AICPIN points, we can conclude if the next D.A hike is going to be for 6% or 7%.

The Dearness Allowance announcements since 2006 have been tabulated and presented, as additional information.