The defence forces personnel, in addition to their pay as per the Matrices above, will be entitled to payment of Military Service Pay for all ranks up to and inclusive of Brigadiers and their equivalents.

The Commission recommends an MSP for the four categories of Defence forces personnel at Rs. 15,500 for the Service Officers, Rs. 10,800 for Nursing Officers, Rs. 5,200 for JCO/ORs, and Rs. 3,600 for Non Combatants (Enrolled) in the Air Force per month.

MSP will continue to be reckoned as Basic Pay for purposes of Dearness Allowance, as also in the computation of pension. Military Service Pay will however not be counted for purposes of House Rent Allowance, Composite Transfer Grant and Annual Increment.

The VI CPC also intended, it was in fact so articulated, that the edge previously enjoyed by the Defence Forces, over the civilian scales would be replaced by the MSP.

Para 2.3.12 (page 76) of the VI CPC Report inter alia states: “The edge enjoyed by the Defence Forces over the civilian scales will, after suitable enhancement to meet the genuine aspirations of the Defence Forces, be given as a separate element called Military Service Pay.”

This Commission has received several requests from various entities, notably the CAPFs, for grant of a pay akin to the MSP. The Commission has taken note of these demands as also the contention of the Services.

The very fact that various segments of government employees continue to raise this demand suggests that there is need to examine, re-assess and spell out conclusively what the Military Service Pay seeks to compensate.

The Commission, after careful consideration of the matter, notes that there are exclusive elements that distinguish the Defence forces personnel from all other government employees. The intangible aspects linked to the special conditions of service experienced by them set them apart from civilian employees.

Defence forces personnel are expected to conduct full spectrum operations in operational environments which are characterised by extreme complexity and may include force projection outside India’s territorial boundaries.

Defence forces personnel are trained for war like situations with highly sophisticated war machinery. They have to keep themselves posted in modern warfare. The military institutions are a key symbol of national pride. Further, the superannuation of defence personnel, particularly Other Ranks (ORs) at a younger age, is also a factor that has been considered.

The Commission has therefore taken a conscious decision that the Military Service Pay, which is a compensation for the various aspects described above and for the edge historically enjoyed by the Defence Forces over the civilian scales, will be admissible to the Defence Forces personnel only. 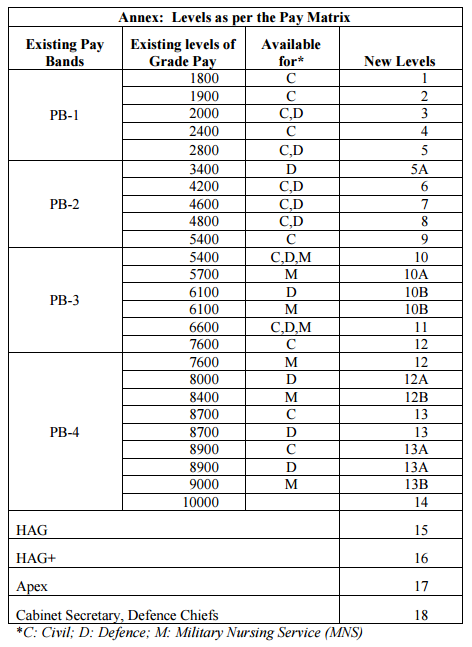