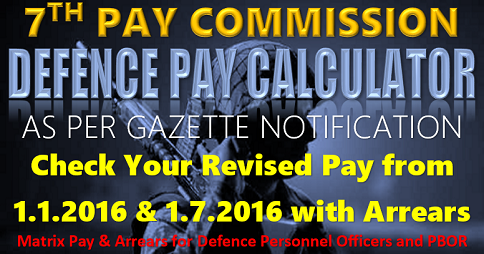 We update the calculator once again as per the Gazette Notification issued by the MoD on 3.5.2017. General recommendations on pay recommended by the Commission have been accepted with the following exceptions in Defence Pay Matrix, namely:

Recommendations on Allowances (except Dearness Allowance) would be referred to a Committee comprising Finance Secretary & Secretary (Expenditure) as Chairman and Secretaries of Home Affairs, Defence, Health & Family Welfare, Personnel and Training, Posts and Chairman, Railway Board as Members. The Committee would submit its report within a period of 4 months.

Till a final decision on Allowances is taken based on the recommendations of this Committee, all Allowances would continue to be paid at existing rates in existing pay structure, as if the pay had not been revised w.e.f. 1.1.2016 i.e. , status quo would be maintained.

Check also: Defence Allowances as per 7th CPC – An Overview

The Calculator calculate the rough estimate of arrears amount without HRA and Other allowances.

(This tool gives only approximate figures for reference purpose only. Visitors are requested to check once again with 7th CPC Gazette Notification)

[Disclaimer: This calculator gives only approximate value on the basis of 7th Central Pay Commission Gazette Notification and also shown the estimate figures only basis on your inputs. Readers are requested to refer CCS Revised Pay Rules 2016]