You are here: Home / House Rent Allowance (HRA) for CG Employees as per 7th CPC

House Rent Allowance or HRA is one of the major salary elements for Central Government employees. The 6th CPC recommended 10 percent of basic salary (Pay) for the employees working in other cities. And now the 7th pay commission recommended 8% of matrix pay for other cities. But the minimum amount of HRA is Rs. 1,800 (The minimum basic pay is Rs. 18,000 and the minimum HRA is equal to 10%). 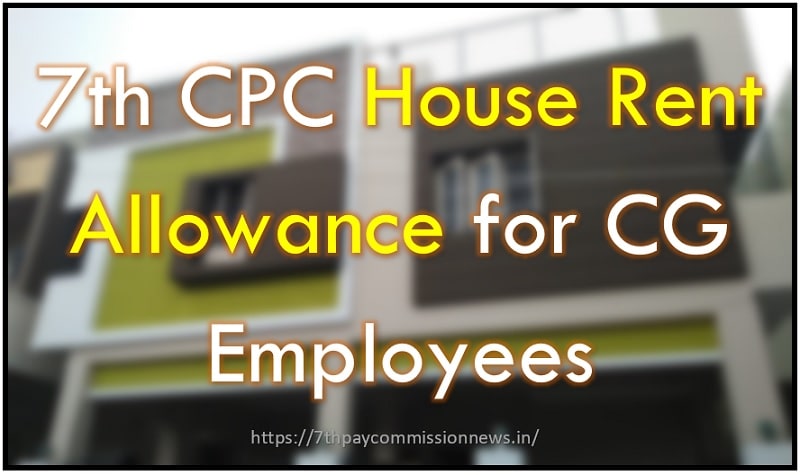 The Government of India issued an important order regarding the rates and entitlements of House Rent Allowance for Central Government employees on 7.7.2017 as per the decision on 7th pay commission report. The new revised rates (percentage) of HRA as per city classification with effect from 1st July 2017 as follows…

Who is not entitled to HRA?
The employees who are residing in government accommodation are not an entitlement to HRA.

What is the meaning of Basic Pay?
The word of Basic Pay is used in the calculation purpose of HRA, does not include any type of pay like special pay, Non-Practising Allowance (NPA), Military Service Pay (MSP), etc.

HRA Calculation with minimum pay of all levels in Pay Matrix

More than 7 lakh employees are benefiting due to the enhancement of minimum HRA and the table shows the basic pay in the pay level of 1, pay level 2 and pay level 3.

Eligibility of HRA
The House Rent Allowance is admissible with reference to the place of office or duty. And it is not referenced with the residence of the employee.

House Rent Allowance (HRA) is a compensation for expenses in connection with the rent of the residential accommodation to be hired or leased by the employee and is graded based on the level of the employee.

Classification of Cities for HRA

Indian cities are classified as three categories (X Cities, Y Cities and Z Cities) for the purpose of House Rent Allowance as per the population record. The ‘X’ Class and ‘Y” Class cities and towns are denoting in the below table as State wise and the other cities are under ‘Z’ Class.

If an employee is living in his own house or he does not pay any rent, he is not eligible for the above said exemption on HRA. Click to calculate your HRA with our simple calculator.