You are here: Home / One Rank One Pension – Comparison of Pay and Pension with Civilian Employees

Why are ex-servicemen disillusioned with successive govts?

Ex-servicemen have protested to PM Modi that his government too has failed to fulfil the promise of ‘one rank, one pension’ –OROP that was part of his party’s poll campaign and a definite promise to our veteran soldiers. Embarrassingly, for the BJP government, ex-servicemen plan a rally to ask why this government has yet to issue an order demand OROP

The long-standing demand of ex-servicemen for ‘one rank, one pension’ (OROP) was accepted by the Indian government in February 2014 with the then Finance Minister P Chidambaram making an announcement in this regard in the Interim Budget. The next government led by Narendra Modi too accepted the demand for OROP in the Parliament. While both the governments stated that ‘money or funding is not an issue’, there still is no order issued for implementing OROP.

“The Defence Veteran community is disillusioned with the National Democratic Alliance (NDA) government, and particularly with Prime Minister Modi. We believed Modi to be a man of his word and commitment, and would implement the OROP. Remember, OROP was agreed to not only by the United Progressive Alliance (UPA) government, but also by Modi-led NDA government. The issue was discussed in two successive budgets, with government promising of providing funds (Paison ki Problem Nahin Hai) needed, on the floor of Parliament. However, it is with a sense of betrayal that the Veteran Community still awaits implementation orders for OROP, despite passage of over six months of its passage in Parliament,” Cdr Ravindra Waman Pathak (Retd).

Cdr Pathak is also member of the Governing Body and Pension Cell of Indian Ex Servicemen Movement. He said, “If the implementation orders are not yet out, we wonder when the money would land up in one’s bank account, given the snail’s pace of the Controller General of Defence Accounts, working leisurely under the Ministry of Defence. How many more aging veterans would pass on/ die, before seeing their dues in their Bank?”

Indian Ex-Servicemen Movement (IESM) is also organising a rally at Nagpur on 12 October 2014, to express their disappointment with the Government’s delay.

Earlier in February 2014, slamming the “delay” by UPA in granting ‘one-rank, one-pension’ for ex-servicemen, Narendra Modi had accused Congress of playing “fraud” with the armed forces. “The government, which is sitting in Delhi has always been playing a farce with the Armed Forces. Before this also, a number of times, the Finance Minister of Congress had made announcements about One Rank One Pension (OROP) but never fulfilled it. Even this time since I am repeatedly talking about it, they have announced it but this is a “fraud” (dhokha) with you. Had Congress party been honest, they had the chance to it in 10 budgets from 2004 to 2014. But they did not do it,” Modi had said.

The ‘deeply hurt, bruised and wounded conscience of ex-servicemen of India’s Armed Forces’, expressed their anguish towards the bureaucracy, which they feel is responsible for the step-motherly treatment meted out to defense forces. The veterans, in an letter sent to PM Modi, say, “It is this specially empowered bureaucracy which, without even a shred of any commensurate knowledge, over the past 67 years, has mastered and honed the craft of repeatedly hurting the pride and morale of the soldiers’ justify from the Chiefs to the sepoy. ‘Jai Jawan’ is handy only at crunch time or prior to elections, where after the Armed Forces are routinely relegated to the status of a ‘necessary evil’ type heavy baggage that the nation, perforce, has to be burdened with. This bureaucracy has been successful in contouring the political thought process in the same mould.”

“In sheer desperation, post numerous appeals to the political leadership, they (the defense veterans) collected at Jantar Mantar, the newly baptized Mecca of protests, to, virtually, beg for One Rank One Pension -OROP. This was seen in the same light as any other ‘rag tag’ event of Indian street protests. No one listened to them and none cared. Now, more confused, they returned their medals to the President of India, the supreme commander of the Indian Armed Forces. These medals, which they were decorated with during their uniformed tenures, were symbols of their selfless service, dignity, valour and pride. Not one word from the supreme commander. Some pension increase was doled out about a year ago, again, in the name of OROP but miles off the target. Actual OROP was a resounding NO by the bureaucrats and, consequently, the government. The beleaguered lot appealed to the courts for various acts of omissions. However, their legitimate arrears, despite having been ordered for payment, by the courts, continue to be denied by the government whose attorneys are filing away plea after repeated plea to reverse or stall these orders against the normal alibi of ‘what about civilians’?,” they said.

“Then, came the first budget of the new government. The Finance Minister, also doubling as the Defence Minister, presented his budget to an over- expectant nation that wanted to hear the loud echoes of your election rallies in the financial roadmap to India’s ‘achhe din’. What came out was, mostly, routine and safe bets, as if all your ‘bold steps to be taken’ had been hijacked, once again and obviously, by the bureaucrats. The FM did proclaim sanctioning of the OROP, finally, with a layout of Rs1,000 crore. This was not even one fourth of the requisite amount. Thus, the UPA II’s gambit was almost repeated. This was stunning, unbelievable but true. Again, no formal government orders about the implementation.”

“Parting with this miniscule component of GDP for OROP will not only rebuild pride and morale of this vital and national human resource but will send a positive signal to the entire edifice of Indian armed forces which is required to remain rock solid for the non-negotiable unity and integrity of India. Lastly, I wish to submit that if you think that OROP would severely dent India’s economy and the ‘steel frame’, please inform the ESMs in clear terms and as a finality. At least they would start breathing and stop chasing an Indian mirage,” the letter sent to PM Modi said. 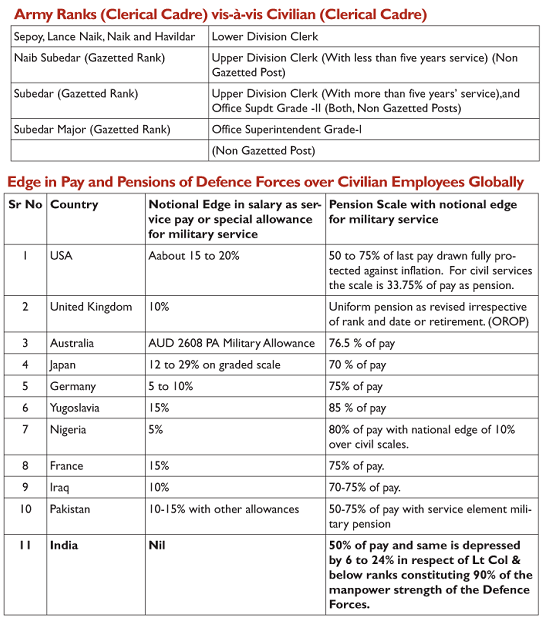 Click the below link for more news about OROP…

ONE RANK ONE PENSION – UPDATED NEWS