UFESM(JM) has written to Govt to correct the tables without any delay so that the pension of past pensioners is brought at par with the pensions of soldiers retiring in 2016. RHS at JM has entered in 238 day.

It has been decided to continue with the agitation at JM and if required agitation will be intensified further if the Govt does not correct the anomalies pointed out by ESM.

MOD/Bureaucrats have again played a trick on ESM family. 3 Feb 2016 Wednesday is a black day in history of Armed Forces, ESM and India.

Government has yet again rudely reminded Armed Forces Personnel and ESM that they are the stepchildren of India and have no rights in this country. All the perks and subsidies are to be enjoyed by politicians and bureaucrats, pseudo kings of modern India.

They can increase their status, pay and perks at their will and are not answerable to Indians who vote them to power. It is interesting that a MLA or MP will get life time pension even if he has served in his position for one day. Bureaucrats will write any amount of perks for themselves without even taking permission of Indians who pay for luxury of bureaucrats by paying heavy taxes.

This agreement stipulates that a soldier will embrace martyrdom willingly to protect the motherland and for safety and well-being of citizen and on the other hand GOI is supposed to look after the well-being of soldier and his family.

And GOI is supposed to ensure that family of a soldier is well taken care and would lead good life even after he has attained martyrdom in serving the motherland. While the soldier of this great Army, Navy and Air Force has lived up-to his solemn oath but the GOI has been lacking in their part of responsibility.

This is a very sad story as widow of a soldier, whose husband had willingly attained martyrdom for this great country, was getting a meager pension of Rs 3500/ only and under this langdi OROP announced by MOD, her pension would be increased to Rs 4070/ only.

Is it not ironical that a veernari is given a meager pension which is even less than an Indian family pays to a maid? It is a joke being played by GOI/bureaucracy with Armed Forces Personnel, ESM and brave widows of this great country.

We the ESM of India beseech the conscience of great Indians and request to take up the issue for correction this anomaly.

NDA Govt had announced approval of OROP for Armed Forces Personnel with great fanfare on 10 June 2014 in their budget but did not have the courage to implement it because of bureaucratic resistance.

However NDA Govt announced truncated OROP on 5 Sept 2015. This announcement had four major anomalies. These anomalies were pointed out to MOD by the ESM agitating at Jantar Mantar.

MOD did not heed to the request of agitating ESM and issued notification of defective OROP on 7 Nov 2015 without correcting any anomaly.

Govt has not corrected even one anomaly out of four anomalies pointed out by the ESM of India. MOD decided to form a one man commission along with this announcement of OROP which is clear acceptance that the announced OROP was defective and would not be accepted by the agitating ESM of Jantar Mantar.

The notification of 7 Nov 2015 also has not addressed the issue of increasing pension of Majors (only less than 1000 alive) with 20 yrs or less than 20 yrs of service as Major to min of pension of Lt Col with MS Pay of Majors and also pension of Nb Sub to be given to Hony Nb Sub.

An appeal was made to Government to approve this as a special case. This has also not been approved by the Govt.

This effort to tweak with the definition is in-fact contempt of Parliament. UFESM (JM) has sent an appeal to all Ms P to take the issue with speakers of both houses.

MOD has issued tables of OROP on 3 Feb 2016 as per truncated announcement of OROP of 7 Nov 2015. These tables completely defy the definition of OROP as pension of past pensioners of all ranks will be fixed far lower than the pension of the soldiers retiring in 2016.

It will be noticed that widows and ORs will get less pension than expected. This ill treatment of Widows, ORs and JCOs is not acceptable. Apart from this notification of 3 Feb 2016 dilutes the definition of OROP and hence is not acceptable.

In view of this it has been decided that our fight at JM will continue as the tables issued by MOD are not acceptable to ESM. Officers table is not given as most of them must have seen the tables and noted their entitlements.

It will be pertinent to mention that GOI has indicated that the funds outgo on OROP is to the tune of Rs 7500/ crore per year. It is surprising that the GOI is ready to spend Rs 7500/ crore and is still leaving the back bone of Armed Forces as unsatisfied and frustrated for a few hundred crores.

This will be affecting morale of serving soldier as today’s soldier is tomorrow’s veteran. Moreover every soldier has a veteran in his family.

And if a serving soldier sees his older generation being treated so shabbily by the Govt, he is likely to lose his enthusiasm to fight to martyrdom and this will not be good for nation.

UFESM(JM) is in constant dialogue with Sh Ram Jethmalani eminent lawyer of India for representing our case to get justice for ESM family. He has very kindly consented to represent ESM free of cost. All possible avenues to find an amicable solution will be explored before going to court.

UFESM(JM) has written to Govt to correct the tables without any delay so that the pension of past pensioners is brought at par with the pensions of soldiers retiring in 2016. RHS at JM has entered in 238 day.

It has been decided to continue with the agitation at JM and if required agitation will be intensified further if the Govt does not correct the anomalies pointed out by ESM.

UFESM(JM) requests all ESM to come to JM and participate in their struggle for approval of true OROP as per definition approved by Parliament. 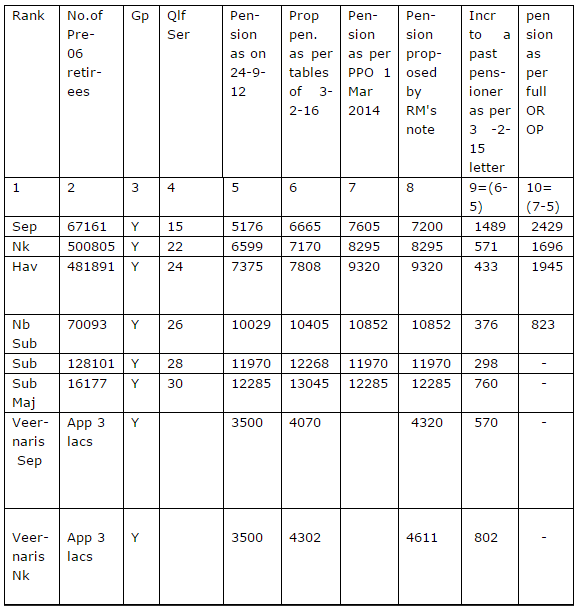