If an employee gets a promotion on 1st July 2016 then how the pay fixation after promotion. The Date of next increment (DNI) will be on 1st January or 1st July of next year. What says the Fundamental Rule 22(a)(i)(1) after the implementation of 7th CPC. 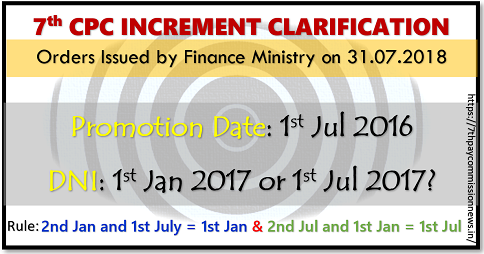 3. A number of references has been received in the Ministry of Finance seeking clarification whether in case of an employee promoted on 1st July 2016, whose pay was fixed on 01/07/2016 in terms of the rules governing fixation of pay on promotion, the next increment may be allowed on 1st January 2017 or on 1st July 2017.

6. This order is issued in consultation with office of C&AG in its application to employees working in Indian Audit and Accounts Department.

7. Hindi version of this order is also attached.

sd/-
(Ram Gopal)
Under Secretary to the Government of India