The All-India CPI-IW for November 2020 increased by 0.4 points and stood at 119.9 (one hundred nineteen and point nine). On 1-month percentage change, it increased by (+) 0.33 per cent between October and November 2020 compared to (+) 0.92 per cent increase between corresponding months of the previous year.

At centre level, Puducherry recorded the maximum increase of 4 points. Among others, 3 points increase was observed in 4 centres, 2 points in 7 centres and 1 point in 30 centres. On the contrary, Guntur, Bhilai, Udham Singh Nagar and Vadodara recorded a maximum decrease of 2 points each. Among others, 1 point fall was observed in 17 centres. Rest of 25 centres’ indices remained stationary. 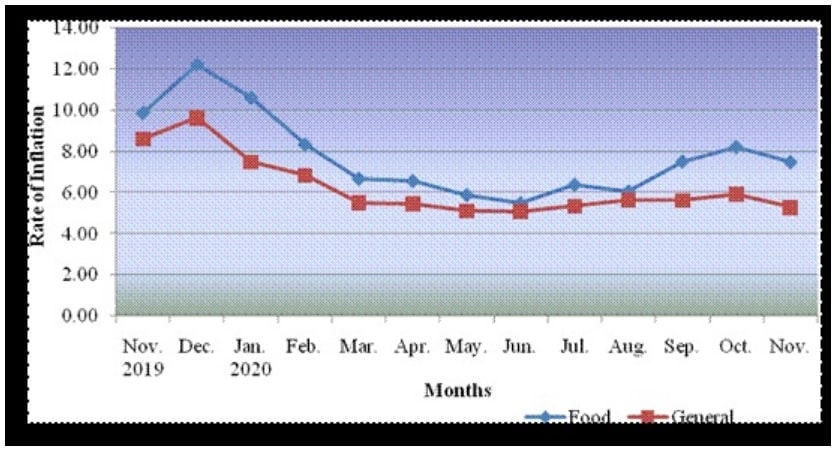 *Rounded up from second decimal place.

Speaking about the latest index, Shri Santosh Gangwar, Minister of State (I/C) for Labour and Employment said, “The rise in index coupled with fall in annual inflation will have dual impact in terms of increasing income and purchasing power of the workers. He added that the effect is mainly due to vegetables which had good supply in the market and provided respite to the consumers.

Shri DPS Negi, Director General of Labour Bureau while releasing the index said, “The rise in index during November, 2020 and fall in inflation rate are in line with other price indices compiled and released by other Government agencies”.

The next issue of CPI-IW for the month of December, 2020 will be released on Friday 29th January, 2021. The same will also be available on the office website www.labourbureaunew.gov.in.

The Labour Bureau, an attached office of the M/o Labour & Employment, has been compiling Consumer Price Index for Industrial Workers every month on the basis of retail prices collected from 317 markets spread over 88 industrially important centres in the country. The index is compiled for 88 centres and All-India and is released on the last working day of succeeding month.