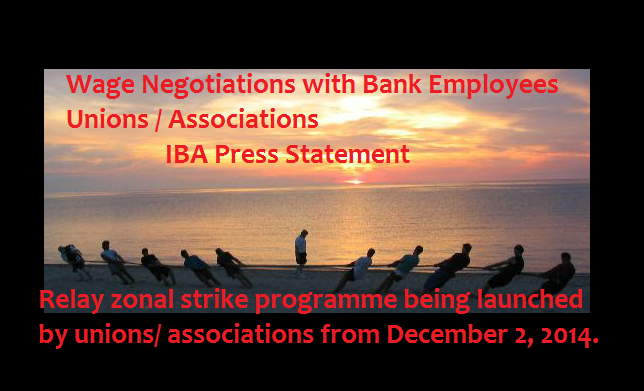 IBA is issuing this press statement in the backdrop of proposed relay strikes and agitational programs by Employee Unions/ Associations causing severe inconvenience to bank customers and general public.

3. The apex level workmen unions and officers’ associations submitted their Charter of Demands in October 2012 for wage revision. The management team under IBA took up bipartite talks almost immediately thereafter. With a view to increase profitability and market share, we proposed productivity linked compensation structure. Plan to introduce cost to company concept of compensation and splitting of wages into fixed and performance linked variable components were placed before unions/ associations. Unfortunately unions/associations rejected our proposals.

4. The Negotiating Committee of IBA has convened 14 rounds of meetings with the representatives of Unions/ Associations so far and two important issues viz., effective date of settlement and merger of CPI at 4440 points (60.15%) as on November 2011 have been amicably settled. The wage revision in banks is done keeping in view the paying capacity of the banks. It is pertinent to note that in the recent years, while operating profits of Public Sector Banks have shown some growth, the net profits have shown declining trends.

Staff expenses have gone up substantially in excess of increases in income mainly due increases in dearness allowances which compensate for the impact of inflation. As such, the banks are not in a position to accept the demand of the Unions/ Associations for 23% hike in salary and allowances.

Moreover, the banks are required to implement Basel-III norms by 2018 for which additional capital is to be infused. Raising capital from the market will require banks to better their profitability. Considering the present paying capacity of banks, a hike of 11% on salary and allowances has been offered.

5. Considering the financial constraints / depleting profits of banks, IBA advised unions/ associations that IBA is not in a position to increase more than the last offer of 11% in pay slip. This works out to 12.5% on Bank’s establishment cost taking into account cost of superannuation benefits.

However, IBA is willing to negotiate further if Unions/ Associations reduce their demand substantially from 23%. Despite the appeal by the IBA and Chief Labour Commissioner (C) at the conciliation meeting held on 10.11.2014 not to go on strike and resolve the issue through bipartism, the Unions/ Associations did not pay heed to the appeals and went on strike on 12.11.2014.

While IBA is always flexible and keen on early settlement of wage negotiations, the Unions/ Associations are stonewalling suggestions to improve productivity and profitability and demanding unaffordable wage increases.

The relay zonal strike programme being launched by unions/ associations from December 2, 2014 is unreasonable, unethical and unwarranted. We appeal to the unisons/associations to give up the agitational path and return to the negotiating table.

6. IBA deeply regrets the inconvenience caused to bank customers and general public due to the agitational programme launched by the employee unions/ associations.