You are here: Home / Employment News / Rising rate of unemployment

(a) whether it is a fact that urban unemployment has risen to 8.2 per cent, if so, the details thereof;

(b) whether Government has been able to control unemployment rate since 2014 till date, if so, industry/sector/year-wise details thereof from 2014 till date; and

(c) the details of the steps taken by Government to increase employment with its timeline?

(a): As per the results of available labour force surveys on Employment-Unemployment conducted by Labour Bureau, Ministry of Labour and Employment, the estimated unemployment rate for persons aged 15 years & above on usual status basis in urban areas in the country during 2012-13, 2013-14 and 2015-16 was 5.3%, 4.9% and 4.4% respectively.

Pradhan Mantri Rojgar Protsahan Yojana (PMRPY) has been launched by the Ministry of Labour and Employment for incentivising employers for promoting employment generation. Under this scheme, Government is paying entire employer’s contribution (12% or as admissible) towards EPF and EPS for all eligible new employees for all sectors for 3 years. Till 30th July, 2018, the scheme covered 76908 establishments and 61.37 lakh beneficiaries.

Pradhan Mantri Mudra Yojana (PMMY) has been initiated by Government for facilitating self-employment. Under PMMY collateral free loans uptoRs. 10 lakh, are extended to small/micro business enterprises and to individuals to enable them to setup or expand their business activities. Under PMMY, the number of loans sanctioned during 2015-16 to 2017-18 were 12.27 crore, out of which 3.49 crore were new entrepreneurs. 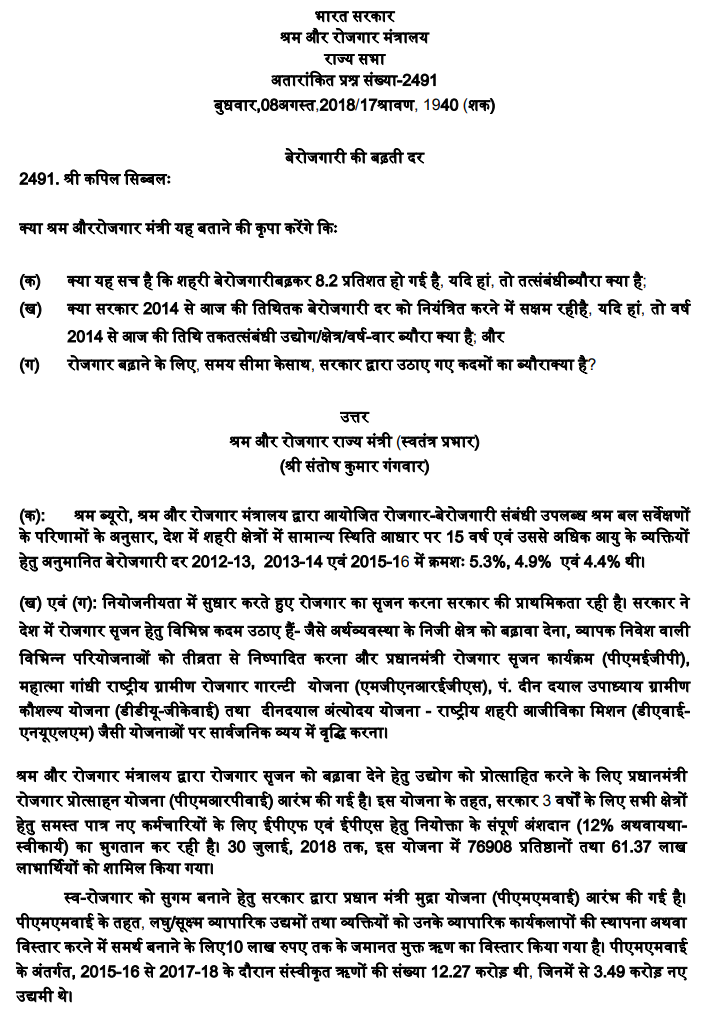 Government takes steps to generate Employment Opportunities Initiatives taken for creation of jobs Advances to Central Govt Employees : Rate of Interest during 2015-16 Advances to Government servants — Rate of interest for purchase of conveyances during 2013-2014. General Provident Fund Interest Rate 8.7% for 2015-16 GPF – General Provident Fund Interest Rate during the year 2014-15 – Finmin Orders No Change in the Rate of Personal Income Tax and The Rate of Tax for Companies on Income in Financial Year 2015-16 GPF interest rate is presently fixed at par with that of PPF interest rate Grant HRA at the Rate of 30%, 20% & 10% of 7th CPC Pay – NFIR