Justification of One Rank One Pension – What is the real status of OROP? 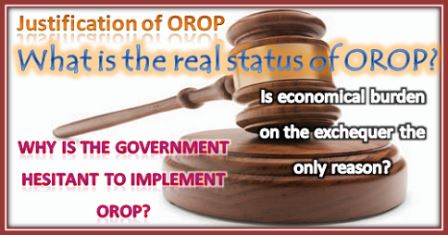 Why is the Government hesitant to implement OROP? – Is economical burden on the exchequer the only reason?

“When the body and spirit are hale and healthy, our soldiers dedicate their life for the safety of the country. Once the body has worn out and the soldiers retire, they want a secure life. What’s unreasonable about this?

“The 35-year-long demand might look unreasonable at the first glance. But, if the request is studied in depth, the urgency and necessity to implement it can be understood.”

IESM claims that civilians and CRPF cannot demand to be included in this scheme.
The moment a young man or woman enters a government service, his/her future is secure until the age of 57-60. The government pays them salaries, promotions and regular incentives and increments. Post-retirement, there is always the pension. But, the soldiers who join the Army, Navy, and the Air Force, opt for retirement at the age of 37. At the time of retirement, they are offered meager pensions. Is it justify to use the same yardsticks to compare the two?

Typically, a man’s most crucial period, in terms of family responsibilities and duties, is between the ages of 40 and 60. “This is also the time when we are left in the middle of nowhere,” they say. The reason? Compulsory retirement with meager pension.

The reason why compulsory retirement is given at the age of 37 is that the army wants young blood. 90% of the soldiers who retire after completing 15 to 17 years of service are usually Jawans. They leave their families behind and work in dangerous and hostile regions, with no guarantee to life. Work conditions are tough and so is the pressure. As a result, they frequently suffer from depression, and stress. Increased casualties, denial of fundamental justifys …their miseries are endless. Such is the nature of work in the Army.

The reason for their meager pensions is that the number of years that they had worked is comparatively less. Let’s consider two young men of the same age, who begin working at the same time – one joins the government services, and the other joins the army. The difference becomes obvious if you compare their financial status at the age of 40 and 60.

Compulsory retirement after just 15-17 years of service at age 37 years means that the soldier is effectively denied salary earnings of 25 years which other government employees (including the police forces) receive because they retire at age 57/60 years.

The chances of an ex-serviceman, who was not handicapped during service, finding employment in government services, are very low. It is even worse for others.

What is ‘One Rank One Pension’?
Instead of taking into account the calendar year in which the soldier retires, OROP fixes the pension on the basis of the rank and the number of years the soldier had served, to calculate his pension. Any future enhancement in the rates of pension, it would benefit all the ex-servicemen. This is the most important feature of the scheme.

There is a gap of ten years between each Pay Commission. Based on the rising cost indices, salaries and pensions are hiked considerably. Older defence personnel should also benefit from it – this is the main objective of OROP.

Pay Commissions are constituted in order to revise the salaries and incentives of the existing government servants. It doesn’t apply for generally retirees – this is the argument put forth by detractors. The age of retirement, in this case, for CRPF Police is 57, and 60, for Central Government employees. “Is it justify to compare us, who receive pay and perks after 3 or 4 Pay Commission revisions, with Armed Forces personnel who are given compulsory retirement at 37?” they ask.

Expense to the Exchequer
The Ministry of Defence, in its report dated 17 February 2015 to the Ministry of Finance, said that the scheme would cost Rs.8300 Crores to Rs.43,000 crores of Defence pensions. Add this to the money being spent on pension, and the number comes to Rs.51,000 crores.

When did the demand grow strong? : It began as a tiny murmur around the time when the Fourth Pay Commission submitted its report. The voice grew louder when the 6th Pay Commission was implemented. The armed forces, the largest employer, was not represented in any of the Pay Commissions.

During the 2004 elections, the Congress party promised to implement the OROP scheme.

In 2008, when the UPA government rejected the scheme, more than 20,000 veterans gathered under the IESM banner, and returned their war and service medals, signed with blood, to the government.

They then explained the justness of their demands to the Prime Minister and the finance minister and have since then been trying to put pressure on the government to implement the scheme. Protests and meetings are being conducted regularly by the IESM all over the country.

In 2013, due to the pressure from Member of Parliament, Mr. Rajeev Chandrashekar, and the IESM, the demand was accepted by the Parliamentary Committee on defence.

In 2014, ahead of the Lok Sabha elections, Narendra Modi promised to implement the OROP, if voted to power. While presenting the budget in July, there was a mention of OROP.

During the celebration rally at Mathura, on May 25, 2015, the country waited to hear about OROP, but Modi spoke not a word about it.

Everybody, including the Prime Minister, finance minister, and the defence minister spoke eloquently about implementing OROP, adding to the hope. Months passed, but nothing materialized.

Making fervent promises in the election campaigns and not doing anything about it for more than 13 months is seen by many as delay tactics. Now, ministers are openly saying that there are lot of complications and practical difficulties in implementing it. This is the reason why open protests have started.

For nearly three weeks now, relay fasts are being conducted at New Delhi’s Jantar Mantar. Protests are also being held by ex-servicemen in many parts of the country. The government keeps giving vague assurances that OROP will be implemented, but the IESM demand a definite date by which OROP would be implemented.

Only time will tell if the scheme will ever be implemented, or if the protests will continue indefinitely.