Canteen Stores Department (CSD) facility is applicable to serving and retired personnel of Defence Forces and not to Para-Military (Central Armed Police Forces) personnel. However, on the lines of CSD, the government launched the Central Police Canteen (CPC) System from 2006 for the serving and retired CAPF personnel and their families. 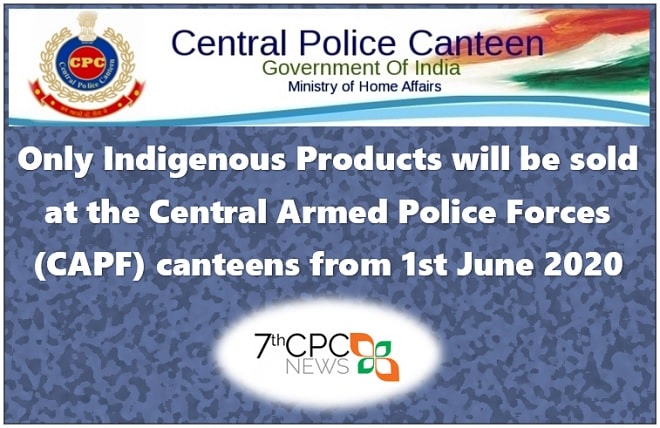 From 1st June 2020, only Indigenous Products will be sold at the Central Armed Police Forces (CAPF) canteens and stores across the country

Prime Minister, Shri Narendra Modi, made an appeal yesterday to make the country self-reliant and use products made in India. Union Home Minister Shri Amit Shah has described this appeal as a guiding light to make India the Global Leader in future.

In this direction today, the Ministry of Home Affairs has decided that all the Central Armed Police Forces (CAPF) canteens and stores across the country will now sell only indigenous products, from June 01, 2020. The total purchase value would be around Rs. 2800 crore. With this decision, 50 lakh family members of about 10 lakh CAPF personnel will use indigenous products.

The Home Minister also appealed to the people of the country and said, “You should use the products made in the country as much as possible and encourage others to do the same. This is not the time to be lagging behind, but to turn the crisis into an opportunity.”

According to Shri Shah, if every Indian pledges to use products made in India (Swadeshi), the country can become self-sufficient in next five years.

Appealing to the people of the country, the Home Minister said, “Let us all strengthen the hands of Prime Minister Modi in this journey of making India self-reliant, by using indigenous products.”