You are here: Home / LTC / Inclusion of four countries to visit on LTC for CG Employees

Inclusion of four countries to visit on LTC for CG Employees 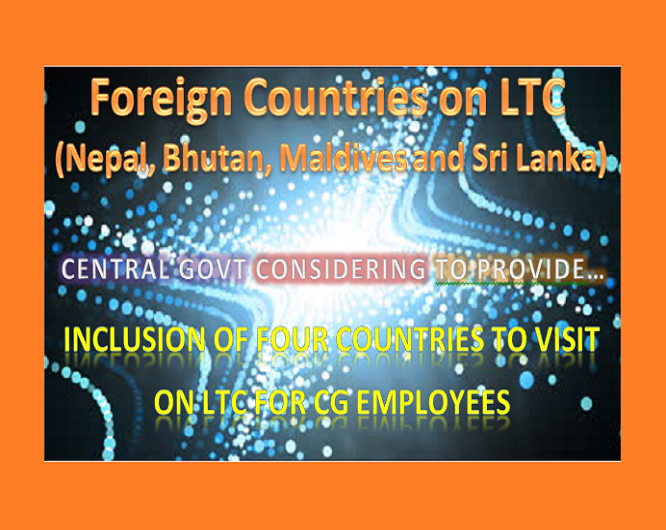 NEW DELHI: Following PM Narendra Modi’s visit to Nepal for the Saarc summit, the government is mulling a proposal to provide leave travel concession (LTC) for government employees to four countries — Nepal, Bhutan, Maldives and Sri Lanka — to boost tourism in the neighbourhood. The LTC will be modeled on the schemes for the north-east and J&K which helped increase tourism and fueled economic improvement in the two regions.

Incidentally, there has been a sharp dip in tourist arrivals from all four countries in the last few years. While Sri Lanka remains one of India’s top source countries, tourism arrivals declined by 11% in 2013 while arrivals from Maldives dropped by 10% between 2012 and 2013.

Similarly, the number of tourists from Nepal came down by 9% while Bhutan, which has a small share of tourists (15,016), saw a drop of 1% in the same period.

Sources in the tourism ministry said, “Introducing LTC for 20 lakh government employees could encourage greater people to people exchange among the Saarc countries. But there will have to be some reciprocal arrangement. We are working on that.” Sources said India was in touch with the countries to consider the proposal’s viability.

At the Saarc summit, Modi had highlighted the need for better connectivity in the region. In his speech, he had said, “It is still harder to travel within our region than to Bangkok or Singapore; and, more expensive to speak to each other.”

There are a large number of Buddhists in the region and India hopes to capitalize on that. Besides Lumbini in Nepal, other significant spots for Buddhists are in India including Bodh Gaya, Sarnath and Kapilvastu. Modi also flagged off a Kathmandu-Delhi bus but plans for greater rail and road connectivity were stonewalled after Pakistan blocked two agreements in Nepal.

Read more on Times of India

LTC to Foreign Countries : Ministry of Civil Aviation nods Leave Travel Concession for Central Government employees is likely to be extended to cover trips to foreign countries Air Travel on LTC once in Ten Years to visit foreign countries – WB State Govt Orders issued on 9.10.2015 Central Staff Visit Central Asian Countries on LTC Very Soon! No proposal under consideration for including more places under the conversion of Home Town LTC to All India LTC Clarification orders on travel by private airlines to visit Jammu & Kashmir Will Air Travel Concession for Central Government Employees be Extended?