You are here: Home / Death Compensation / Any death or permanent disability benefits of Government Employee 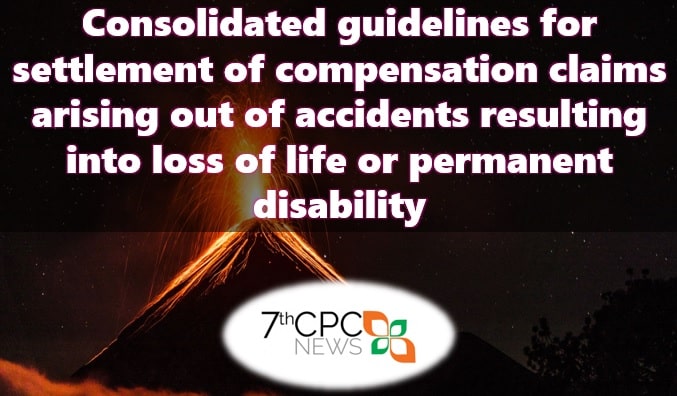 Guidelines for Settlement of Claims for Compensation for Death or Permanent Disability Arising from Accidents Faced By Members of General Public And Certain Categories of Peron’s in the Department of Economic Affairs And Autonomous Organisations and Public Sector Undertakings under its control.

1. Title: These guidelines may be called as Guidelines for Settlement of Claims for Compensation.

2. Effective date: The guidelines would be effective from 4th Feb, 2019.

3. Applicability: These guidelines would govern the settlement of compensation claims arising out of accidents resulting into loss of life or permanent disability of the following categories of persons:-

(i) Members of general public visiting the premises of Department of Economic Affairs or any of the autonomous organisations/public sector undertaking under its administrative control, for any official purposes who may not be covered under any provisions/rules/guidelines for any compensation on account of their not being a Government employee;

a) Accident: Any death or permanent disability resulting solely and directly from any unintended and unforeseen injurious occurrence caused during the maintenance, operation and provisioning of any public services undertaken by the Department.

d) Dependent: As defined in the Employee’s Compensation Act, 1923.

e) Designated Officer: An Officer designated by the Competent Authority of the Grade of Junior Administrative Grade, (JAG) or equivalent for the purposes of receiving and processing claims for compensation under the present Guidelines.

f) Victim: Any person who suffers permanent disablement or dies in an accident as defined in these Guidelines.

g) Permanent Disablement: A disablement that is classified as a permanent total disablement under the proviso to Section 2 (I) of The Employee’s Compensation Act, 1923.

5. Detailed Accident Report: The report prepared by the police within a period of 30 days from the date of incident as per Schedule of this guidelines.

Explanation: For the purpose of the preparation of the detailed accident report, the word “injury as referred in Schedule –I refers to “permanent disability” as mentioned in clause 4(i) of the Guidelines.

6. Extent of Liability: On the occurrence of any accident as defined under these Guidelines, the Department shall, whether or not there has been any wrongful act, neglect or default on part and notwithstanding anything contained in any other law, be liable to pay compensation to such extent as prescribed below:

7. Procedure of settlement of claims in respect of compensation

a) The Victim or his/her dependents would make an application within a period of 90 days of the accident to the Designated Officer under whose jurisdiction the accident had occurred. The application should be accompanied by the following documents:

(iii) Certified copy of FIR lodged in respect of the accident.

(iv) Proof of applicant’s relation with the victim/Dependency Certificate.
To establish the genuineness of the claim and identity of the claimant(s), the
Designated Officer may seek any further documents from the claimant(s), as he deems necessary, for settlement of claim; Provided that where there are more than one dependent, the applicant must mention their name, addresses and relations with the victim and the Designated Officer may at his own discretion issue notices to all before releasing the compensation.

b) The Designated Officer, on receipt of above application, taking into consideration the Detailed Accident Report submitted by the Police Authority, would process the claim of compensation on priority basis but would not take more than 30 days for disposing off the same in any case.

c) Notwithstanding anything contained in these guidelines, the Designated Officer, in case where no application is received from the victim /dependents of victims, may on receipt of the detailed accident report proceed suo-moto to initiate the process for consideration for grant the compensation to the victim/dependents of victim.

d) With effect from the date of coming into force of these Guidelines, all
contracts/agreements to be entered into by the Department with any person or agency for maintenance, operation and provisioning of public service would invariably include a clause whereby any compensation paid under these guidelines shall be recoverable from such person, agency or firm.

e) In no case a claim for appointment of any of the dependents of he victim on the compassionate grounds would be entertained by the Department.

8. Method of Disbursement of compensation

9. Appeal: An appeal against the decision of the Designated Officer in respect of the amount of compensation or rejection of such claim shall be made to competent authority within a period of 30 days of receipt of such appeal.

PART-II-IMPACT OF THE ACCIDENT ON THE VICTIMS

3. Any other relevant information.

PART-III- RELEVANT DOCUMENTS TO BE ATTACHED

1. First Information Report
2. Photographs of the scene of the accident from all angles
3. Statement of the witness recorded by the police
4. Scientific report, If the Victim was under the influence of any
liquor/drugs

6. In case of Injury

a) MLC
b) Multi angled photographs of the injured
c) Photograph, specimen, signatures attested by the bank and identify proof of the Injured.
d) Disability certificate

7. Any other relevant information

Verified at ………….. on this ……………. of ………………, that the contents of the above report are true and correct and the documents mentioned in part III have been verified.