Conveyance Allowance to Railway Employees as per 7th Pay Commission 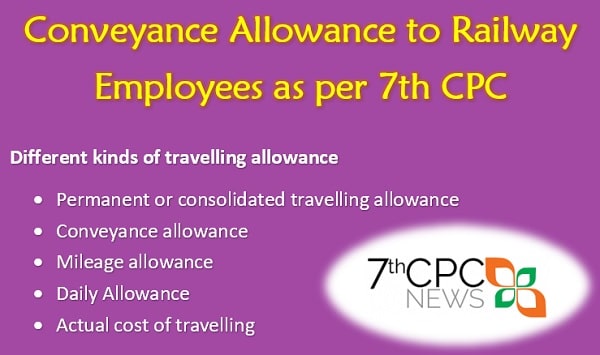 1606. Conveyance allowance. –(1) A competent authority may grant on such conditions as it thinks fit to impose, a monthly conveyance allowance to any railway servant who is required to travel extensively at or within a short distance from his headquarters under conditions which do not render him eligible for daily allowance.

(2) Except as otherwise provided in the rules in this chapter or directed by the sanctioning authority, a conveyance allowance may be drawn all the year round, shall not be forfeited during absence from headquarters, and may be drawn in addition to any other travelling allowance admissible under the rules in this chapter, provided that a railway servant, who is in receipt of a conveyance allowance specifically granted for the upkeep of a motor car or motor cycle, shall not draw mileage or daily allowance for journey by a motor car or motor cycle except on such conditions as the sanctioning authority may prescribe.

(3) A conveyance allowance may be drawn during leave or temporary transfer, or holidays prefixed or suffixed to leave or joining time.

Note 1: The rates of fixed Conveyance Allowance shall automatically increase by 25% whenever Dearness Allowance payable on the revised pay structure goes up by 50%.

NOTE 2.- In calculating the mileage travelled, only the journeys performed on duty within a radius of 8 kilometers from Headquarters shall be taken into account and journeys from residence to Office or vice-versa shall not be considered as journeys on duty.

NOTE 3.- The average monthly mileage shall be checked and certified by the Accounts Officers before the allowance is sanctioned.

The conditions for the grant of this allowance shall be as follows:-

(ii) The conveyance allowance will be determined for specific posts on the basis of “controlled traveling (see (iii) below) by the sanctioning authority and the officers appointed to these posts will draw the same unless the mode of conveyance is different subject to the satisfying the prescribed conditions. Where there are a number of posts in the same category, the post(s) for which the allowance is intended should be clearly identified in the sanction and the rate for each such post should be clearly stated.

(a) The distance travelled daily on official duty.

(b) Place visited with distance covered and purpose of such visit.

Once the amount of conveyance allowance is fixed and sanctioned, it will not be necessary for an officer to maintain the log book for the purpose of drawing the allowance from month to month unless the controlling officer specifically desires it to be maintained. The allowance may be drawn for the currency of the sanction so long as the controlling officer is satisfied that there has been no change in the nature of the duties of the Railway servant or the extent of his touring to justify the withdrawal of or a reduction in the rate of allowance. A certificate to this effect should be endorsed by the controlling officer in the pay bills of the Railway servant concerned for the months of January, April, July and October in each year. He will also countersign the pay bills for these months. The review to be conducted at the end of two years should be made in accordance with the procedure laid down for the initial grant of an allowance.

(vi) If a Railway servant travels by road in his own conveyance beyond a radius of 8 kms. either in combination with the rail steamer/air journey or otherwise, he may at his option exchange his conveyance allowance at the rate of 1/30th for each day for any traveling allowance i.e. daily allowance and/or mileage allowance admissible to him under the rules.

(vii) A Railway servant in receipt of conveyance allowance should not normally use staff car for journeys within his local jurisdiction. If, however, he is permitted by a competent authority to use a staff car for journeys within his jurisdiction, recoveries should be made from the officer at the rates laid down under the Staff Car Rules. If the journey is beyond the radius of 8 kms. of the headquarters, the officer will be allowed daily allowance and or mileage allowance admissible under the rules subject to the following deductions being made therefrom-

(a) Full charge for the use of staff Car calculated under Staff Car rules.

(viii) If the motor cycle or motor car/scooter is out of order or is not used for any other reason for more than 15 days at a time, no allowance shall be admitted for the period in question.

(ix) These orders do not apply to railway doctors for whom separate orders have been issued by the Railway Board for grant of conveyance allowance.

Government of India
Ministry of Railways
(Railway Board)

Consequent upon the acceptance of the recommendations of the Seventh Central Pay Commission and in supersession of Board’s letter No. F(E)I/2008/AL-7/3 dated 03,10,2008 on the subject the President is pleased to revise the rates of Fixed Conveyance Allowance admissible to Railway employees under Rule 1606 (4) of IREC Vol. II (2005 Edition), as indicated below:

These rates shall automatically increase by 25% whenever the Dearness Allowance payable on the revised pay Structure goes up by 50%.
The other terms and conditions for grant of this allowance will remain unchanged.

These orders shall take effect from 1st July,2017.