Revised Guidelines in Processing the Claims of Compassionate Appointment – DoPT

Sub: Consolidated instructions on compassionate appointment – Replacement of Para 13 – regarding.

The undersigned is directed to say that consolidated instructions on compassionate appointment under the Central Government were issued vide this Department’s O.M. No. 14014/2/2012-Estt. (D) dated 16.1.2013. Para 13 of these consolidated instructions provides guidelines to the competent authorities in Ministries/Departments for dealing with requests/ applications seeking appointment on compassionate grounds and disposal of such requests/ applications thereof by the Ministries/Departments.

2. References have been received from different Ministries/ Departments relating to the procedure and modalities involved in processing claims of compassionate appointment. The lack of uniformity in processing such claims by different Government offices, has also come under scrutiny of the Courts including Central Administrative Tribunals. As a result, a need has been felt to bring in more objectivity and transparency as well as streamline the process in dealing with requests/Applications seeking compassionate appointment. The Hon‘ble Jabalpur Bench of the Central Administrative Tribunal, in its Order dated 26.9.2019, in O.A. No. 202/00756/2017 of Deepanshu Raje v/s Union of India & Others. inter-alia, directed Secretary, Department of Personnel and Training, to issue revised guidelines, so as to bring in more transparency and probity in the system in processing the claims of Compassionate Appointment.

Also Check: Checklist for the cases of appointment on compassionate grounds 2020

3. Therefore, after careful examination, the procedure, as provided in O.M. dated 16.1.2013. has been reviewed in consultation with the major stakeholder Ministries/Departments. Accordingly. it has been decided to substitute existing Para 13 of the consolidated instructions (OM dated 16.1.2013), with revised Para 13 given in Appendix.

4. All Ministries/Departments may circulate these revised instructions to all offices under their administrative control and also issue. wherever necessary. departmental instructions for supplementing these guidelines, for dealing with requests/applications seeking appointment on compassionate grounds. 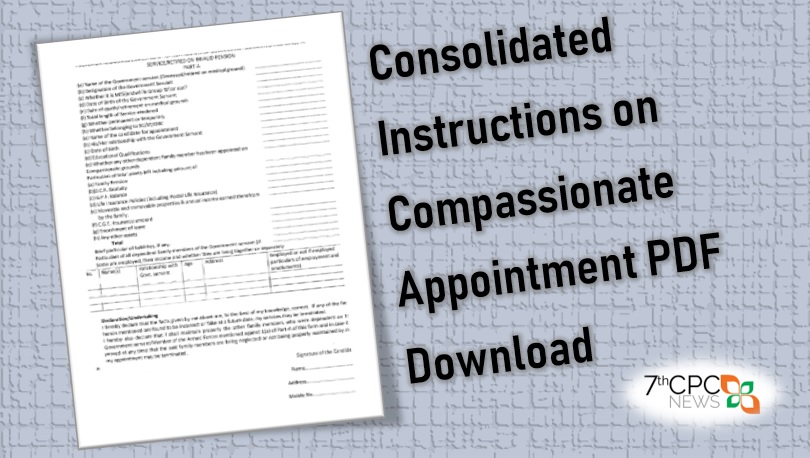