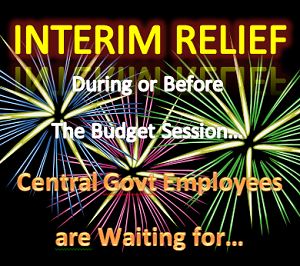 Mumbai bureau Venu Gopal Arya writes an article regarding Interim Relief, he said, the declaration by the government may be done during or before the budget session. We present his view here to our blog viewers for easy understanding…

Staff union making up pressure on the Seventh Pay commission

Even though the Seventh Pay commission was formed by the Manmohan Singh government before the advent of Election for the sake of a Political advantage, this was pleasant news for the Central Government Employees.

Meeting Employees and Organisations in different cities and understanding their living conditions is the general functional procedure of the Pay commission. It is to be known that the recommendation for House Rent Allowance is also given by the Pay Commission.

Sources say that the declaration by the government may be done during or before the budget session.

The pay commission is also taking a memorandum from the Employee Unions and Organisations. As always, even this time every Employee is looking forward to the Railway Federation, as the Railway Employee Union is believed to be very strong. It is believed that the conditions and directions of the Pay commission are influenced to a very large extent by the Railway union. The defence organisation is also very strong, but they didn’t accept the conditions of the Sixth Pay Commission, and later their pay scale was modified. For this reason, all the Central government employees have fixed their sight on the Railway Union.

This time, Railways has been divided into two big Employee unions for the sake of Pay. Now, only time can tell how fruitful will this strategy will prove to be.