Introduction
Subsequent to the implementation of the III CPC recommendations, Central Government Employees’ Group Insurance Scheme (CGEGIS) was notified in 1980 and came into force w.e.f. 1 January, 1982.

The scheme serves the twin objectives of (a) providing a lump-sum amount to the families in case of an employee’s death and (b) a lump-sum payment to the employee on cessation of employment, both on a wholly contributory and self-financing basis.

Present Position : CGEGIS comprises a Savings Fund and an Insurance Fund in the ratio 70:30. The present rates of deduction, insured amount and savings units are as follows:

The value, in ₹, of each unit (for Savings) is published by the Ministry of Finance every year in the form of Tables of Benefits, and the total amount is worked out using the same depending upon when the employee joined the scheme and the year/month of cessation of membership.

Demands : The Commission has received numerous representations from various stakeholders stating that the Monthly Deduction as well as the Insurance Amount have remained unchanged since 1990. In the present context, they are too low and should be increased.

As a logical comparator, the Commission considered the rates under Army Group Insurance Fund (AGIF), which have become applicable w.e.f. 01.09.2013. These are as follows:

The Commission also took into view the fact that pay of Defence personnel is by and large higher than that of Civilian employees of comparable level. Hence, with suitable modifications for Civilian employees, the following rates of CGEGIS are recommended: 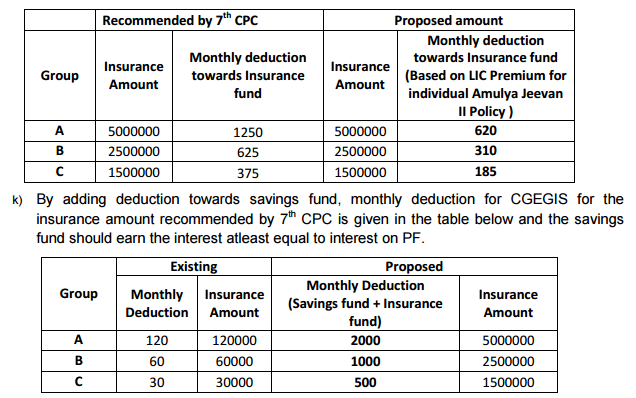 The Commission also took note of the fact that the Tables of Benefits published by Ministry of Finance are based on the mortality rate of 3.75 per thousand per annum up to 31.12.1987 and 3.60 per thousand per annum thereafter. In its report (brought out in January 1997), the V CPC had pointed out that the mortality rate, life expectancy and health delivery systems have improved over a period of time.

They had highlighted the need “for a detailed review of the current mortality rates with a view to revising the apportionment between the Savings and Insurance Funds.” Since it was likely to take some time, they had recommended a ratio of Savings Fund to Insurance Fund of 75:25, with “appropriate machinery for a periodical review of the mortality rates and adjustment of the apportionment ratio.”

Accordingly, this Commission recommends that the ratio of Savings Fund to Insurance Fund be modified from the present 70:30 to 75:25, as an interim measure, pending a detailed review. It is also recommended that periodical reviews of mortality rates should be undertaken for suitable adjustment of the apportionment ratio. The Tables of Benefits may be modified accordingly.

Enhancement of Insurance Coverage under CGEGIS – BPMS Unjustified deduction for Group insurance Scheme in 7th Pay Commission Report – IRTSA 7th CPC CGEGIS : Illogical recommendation of 7th CPC CGEGIS 1980 : Annual report including CGEGIS subscribers for the year 2014 CGEGIS Table 2015 – Tables of Benefits for the savings fund for the period from 1.1.2015 to 31.12.2015 CGEGIS Calculation Table from October and December 2019 7th CPC Recommendation on CGEGIS is not accepted by Govt