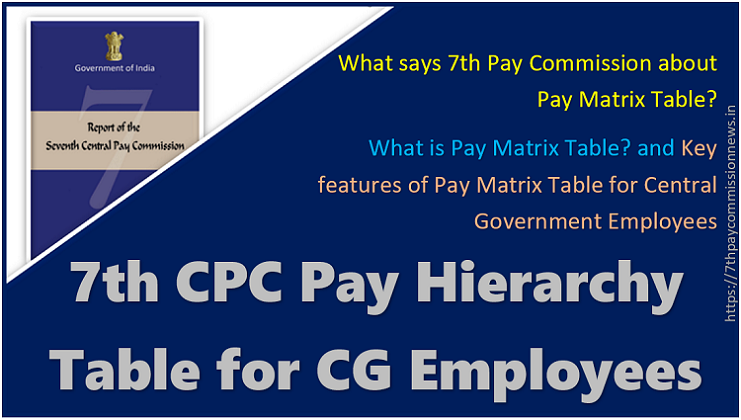 What says 7th Pay Commission about Pay Matrix Table?
The Commission has adopted an innovative design to make the remuneration structure attractive. It has adopted the need based minimum wage formula for designing the pay matrix. The rationalization of pay levels has been done keeping this minimum pay as the base for all calculations. It has been recommended that the minimum pay at each level will be the entry pay for direct recruits for those levels. Each level has been placed equidistantly. The various stages within a level moves upwards at the rate of 3 percent per annum. Owing to this rationalization, the quantum of increase in pay on promotion, either on regular basis or through the MACP, is likely to be substantial. This design will make the existing remuneration pattern in the government more attractive.

What is Pay Matrix Table? and Key features of Pay Matrix Table for Central Government Employees : Pay Matrix which is simple, transparent, predictable and easily comprehensible. During their interactions with the Commission, the stakeholders placed many demands, ranging from common entry pay, rationalization of the existing grade pay structure, common treatment of like cadres, transparent pay structure as also increasing the frequency of the MACP.

The new pay matrix incorporates all these features: subsuming the grade pay, the rationalized matrix presents the whole universe of pay levels in one simple chart. The levels have been rationalized too, displaying a logical pay progression. Employees would be able to see their pay level, where they fit in and how they are likely to progress over their career span. The Commission has also recommended simplified procedures for computation of pension.

The major differenet between in the pay matrix table recommended by the pay commission and notified by the Government is in the pay hearchy of level-13. The Notification (16.5.2017) said, the index of Rationalisation (IOR) of Level-13 enhanced from 2.57 to 2.67. The below table describe the different between recommended pay hierarchy and enhanced pay hierarchy…