DISCONTINUING CENTRALISED CAR SANCTION FOR PURCHASE OF CAR THROUGH CSD

To
All Head Quarters including OFB & KSB

DISCONTINUING CENTRALISED CAR SANCTION FOR PURCHASE OF CAR THROUGH CSD

2. Due to budgetary constraints, the car sanction was centralised in Jan 2012. However, due to the improved Budgetary allocations, the centralised Car Sanction by CS Dte on behalf of the QMG is being discontinued with effect from 20 Jul 2015. Individual(s) will process the car sanction through the CSD Depots as hither-to-fore prior to Jan 2012. The new indent form to be submitted to CSD Depot is att at Appx and also can be downloaded from www.csdindia.gov.in/www.indianarmy.nic.in. Guidelines for purchase of four wheeler from CSD is also enclosed.

3. The countersigning authorities and CSD Depots will exercise due diligence while scrutinising the documents to verify the authenticity of applicant and ensure that only eligible category avail this facility as enunciated vide our letter No 95286/SG/Q/DDGCS dated 29 Apr 2015 (Copy att). The onus of correctness of application will be on both applicant and countersigning authority to prevent any misuse/malpractice of this facility. Each application will be vetted by CSD Depot for orrectness in all respects. In case any malpractice/misuse is noticed, strict disciplinary action will be initiated.

4. This Letter be given vide publicity inculuding display in the notice boards in Station HQs Zila Sainik Boards and URCs for information of all concerned.

Guidelines for purchase of four wheelers from CSD

Procedure for Purchase of Four Wheelers 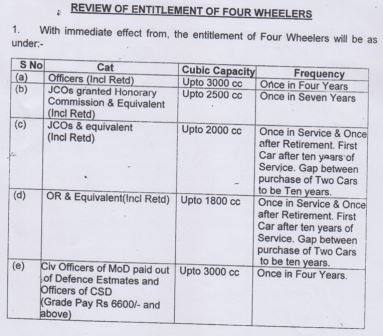