Press Release of All India Consumer Price Index for the month of February 2018 has been released by Labour Bureau on 28.3.2018. The index decreased by one point and stands at 287. (Check DA with Tool – Click the below image)

The All-India CPI-IW for February, 2018 decreased by 1 point and pegged at 287 (two hundred and eighty seven). On 1-month percentage change, it decreased by (-) 0.35 per cent between January and February, 2018 which was static between the two months a year back.

At centre level, Bokaro reported the maximum decrease of 5 points followed by Mumbai (4 points). Among others, 3 points decrease was observed in 16 centers, 2 points in 14 centres and 1 point in 16 centres. On the contrary, Coimbatore and Jamshedpur recorded a maximum increase of 4 points each followed by Lucknow, Goa and Chennai (3 points each). Among others, 2 points increase was observed in 3 centres and 1 point in 4 centres. Rest or the 18 centres indices remained stationary.

The indices of 38 centres are above All-India Index and 37 centers’ indices are below national average. The index of Varanasi, Bengaluru and Chandigarh centres remained at par with All-India Index.

The next issue of CPI-IW for the month of March, 2018 will released on Friday 27th April, 2018. The same will also be available the on the office website www.labourbureaunew.gov.in. 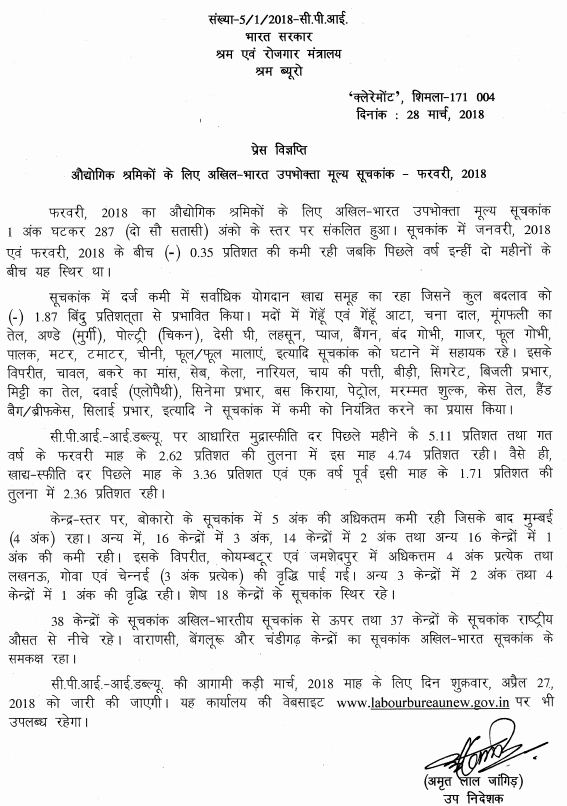