You are here: Home / Corporatisation of Ordnance Factories – Still the cloud is not clear – INDWF Statement

Media is highlighting in the press that M of D is proposing to corporatize the Ordnance Factories. ( The HINDU Dt 18.10.2015). Also damaging statements are appearing in the Press against Ordnance Factories. In this respect, all the three recognized Federations submitted a Joint memorandum to Hon’ble Defence Minister on 30.;12.2014 requesting him to call for a meeting to discuss the proposal of M of D about Ordnance Factories.

But till date, no intimation has been received from M of D. IN the meantime, the JCM III level council meeting took place at OFB Hqrs on 28.01.2015 in which we have raised the issue the clarified from him. According to the Chairman/OFB, no communications from M of D till this movement.

But the signals are changing the environment., Chairman/OFB met Raksha Mantri 4 times within a period of 1 ½ months and explained with the team of officer about the action taken to achieve Rs.20000 Crores target within 3 years. Also participated Make in India summit on 29.12.2014 and presented the futuristic programme and road map of Ordnance Factories.

Still the cloud is not clear and the M of D is proceeding on its own without consulting or discussing with the stake holders including working class organisations. Considering the present situation and the proposal of M of D, the staff side members of JCM III level council of OFB unanimously resolved in a meeting held on 27.01.2015 and submitted the resolution on 28.01.2015 to Chairman/OFB and requested him to forward the same with his recommendations to Ministry of Defence and then the Staff side members staged WALKOUT as a token of protest for 10 minutes in the meeting and then resumed deliberations.

FORWARDING RESOLUTION AND THE MINUTES OF THE JOINT MEETING HELD ON 27.01.2015

As per the resolution of the Joint meeting of Staff side JCM III all our Affiliated Unions are requested to submit the copy of the resolution signed by all Staff side members representing in the JCM IV Level council duning the nedt JCM IV Level meeting the General Manager of Your factory and request him to forward the same to the Secretary, Ministry of Defence and then stage or Walk out for 10 minutes as a token of protest for the proposal of Corporatisation and communicate to the Undersigned. 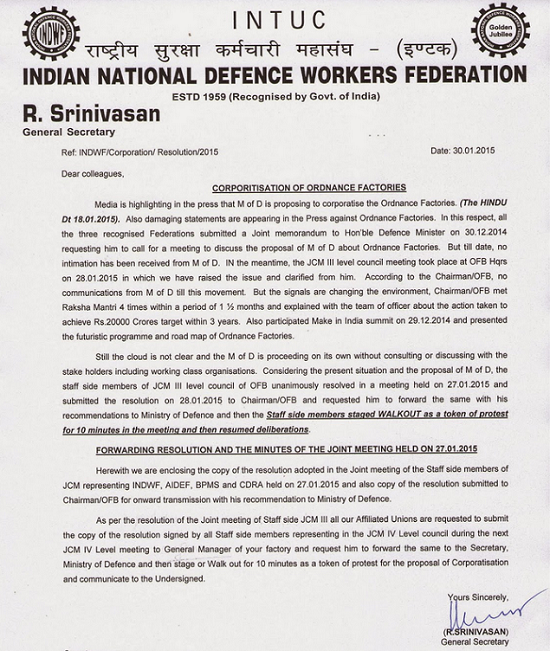 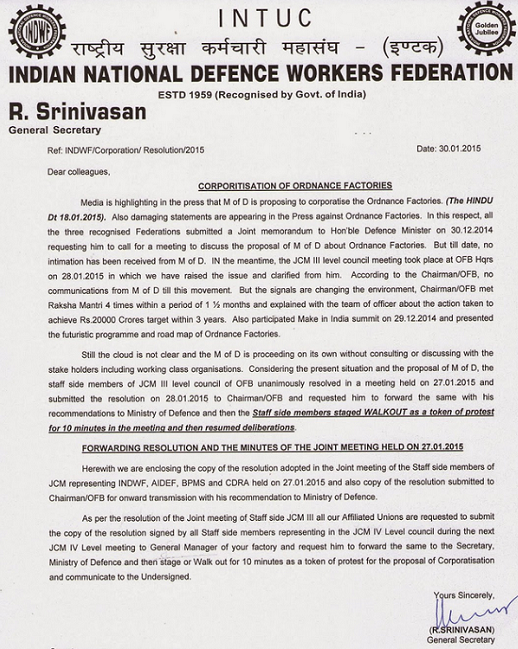 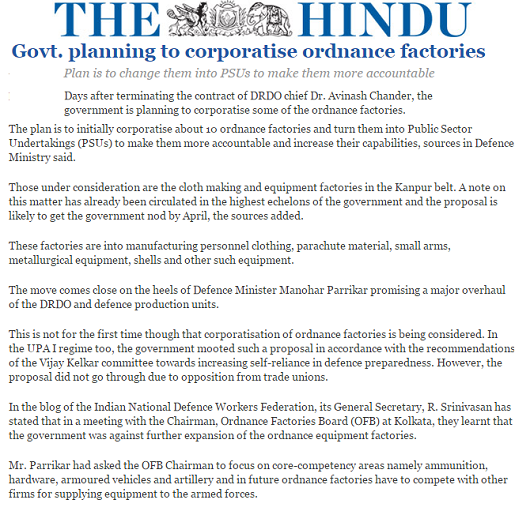