You are here: Home / BPMS / Press release against Government’s announcement to Corporatize OFB

Under no circumstances, shall BFMS tolerate such unilateral, unjust and bad decisions of the Government 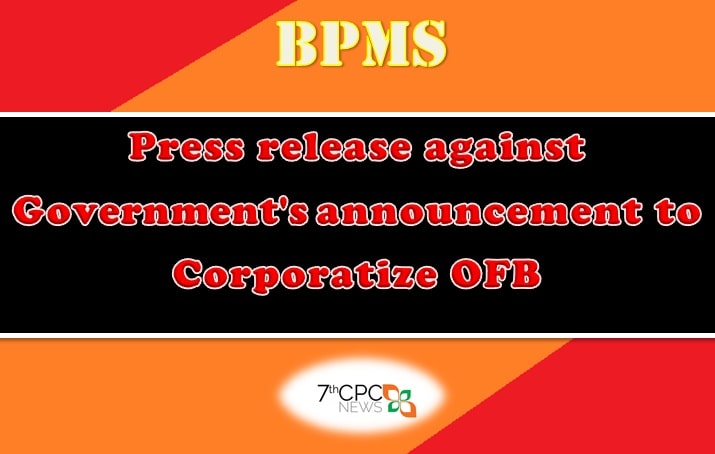 Bharatiya Pratiraksha Mazdoor Sangh
(An All India Federation of Defence Workers)
(An Industrial Unit of B.M.S.)
(Recognised by Ministry of Defence, Govt. of India)

Today as part of the Part-4 of the Atmanirbhar Bharat — New Horizons of Growth, the Finance Minister under the topic “Enhancing self reliance in Defence Production, announced the policy decision of the Government to Corporatise the Ordnance Factories. Further, under “Policy Reforms” raised the FDI under the automatic route from 49% to 74%. Further also, under the chapter ‘India to become a global hub for Aircraft maintenance. Repair and Overhaul (MRO)” announced “Convergence between Defence Sector and Civil MROs will be established to create economies of scale” thereby indicating privatization of Base Repair Depots of Indian Air Force, The Government also issued RFI for converting 505 Army Based Workshop under the GOCO Model on 10/05/2020.

As a responsible stake holder, Bharatiya Pratiraksha Mazdoor Sangh, condemns and opposes these decisions of the Government which has been taken unilaterally without consulting the Federation, as assured from time to time by all authorities including the Hobble Raksha Mantri and also the written decision as minutised under Para 3 & 4 of the meeting dt.23/08/2019. In fact during those discussions, the Government had assured to give a target of 30K Crore and the employees had accepted the challenge thrown by the Government.

The above act of the Government in making such declaration when the Nation is engaged in fighting the Covld¬19 pandemic, not only amounts to an act of dishonouring of commitment but also establishes the arrogance of the administration and a derailment of the democratic process.

Here it may be pertinent to note that during this sudden unprecedented situation of Covid-19 situation, almost overnight, Ordnance Factories responded to the Nation’s requirements by starting production of essential items like Coveralls, Hand Sanitisers, Tents, Face Masks, Repairs of Ventilators, Stretchers etc. This has been applauded by all authorities through various modes including PIB release, Twitter etc. Here it may also be important to note that this could happen because in the present set up the OFs are totally dedicated to the Nations requirement without having to bother about commercial interests and Return on Investment etc. Can this be possible as a “Corporate set up where every money spent will have focus an Rol ?

Last week itself, the Hon’ble CDS and also top Army Officers made a commendable statement that under the given situation, the Army will opt for Made in India products and OFB being the single largest entity for Make in India products were all set to deliver to the expectations of the Government and even started the process of ramping up its production machinery, including cost cutting measures.

Similarly, the Army Base Workshops and the Base Repair Depots play a crutial role in maintaining the hardware of the forces and many “trade secrets” are being kept in the process. Opening up these important sector to private parties is a cause of concern as there are chances of jeopardizing the national interest_

BPMS hereby calls upon the Government to immediately roll back its decision, failing which it will launch a Nation wide agitation, which will be at the risk and cost of the Government.

Under no circumstances, shall BFMS tolerate such unilateral, unjust and bad decisions of the Government.