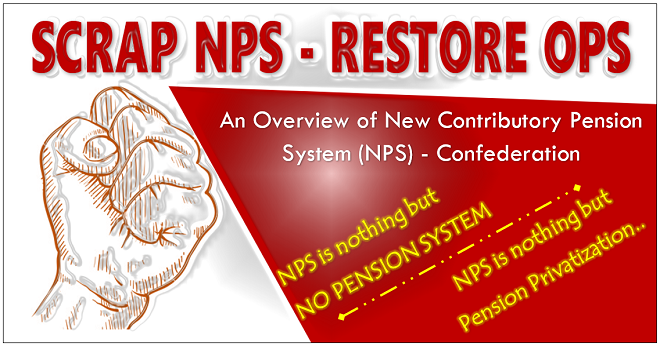 Pension system was in vogue in India for a century or more and the British Government during the pre-independence era introduced Pension Rules for Government employees and thus made it statutory. In the year 1982 Supreme Court in its landmark judgement in Nakara’s case declared that – “as per India’s constitution, Government is obliged to provide social and economic security to pensioners and that Government retirees had the fundamental right to pension….. Pension is not a bounty nor a matter of grace depending upon the sweet will of the employer. It is not an ex-gratia payment, but a payment for past service rendered. It is a social welfare measure, rendering socio-economic justice to those who in the hey days of their life, ceaselessly toiled for their employers on the assurance that in their old age, they would not be left in lurch.”

During the advent of globalisation policies in 1980’s the pension reforms also started simultaneously. IMF & World Bank started publishing so many reports and documents emphasizing the need for pension reforms. They also started studying about the reforms to be undertaken in the pension sector in India. In 2001, “IMF work paper on pension reforms in India” and World Bank India specific report “India – the challenge of old age income security” were published. Their work reports emphasized that “Pension obligations or promises made by the Governments which have potential of exerting pressure on Govt. finances, have been a subject of increased focus in assessing medium to long term fiscal sustainability.” In tune with the dictates of IMF and World Bank BJP-led NDA Government appointed Bhattacharjee Committee in 2001 headed by Ex-Chief Secretary of Karnataka, to study and recommend pension reforms. Thus after creating ground for pension reforms, under the pretext of implementing recommendations of Bhattacharyya Committee, the NDA Government introduced New Pension System called Defined Contributory pension system for all employees who join service on or after 01-01-2004. The Congress-led UPA Government which came to power in 2004 continued with the reforms and promulgated an ordinance to legalise NPS. But UPA-I Govt. could not pass the Pension Bill in Parliament due to stiff opposition of Left Parties supporting it. Later when UPA-II Government came to power the Pension Regulatory and Development Authority (PFRDA) Bill was passed in the Parliament with the support of BJP, the then opposition party. Many State Governments governed by political parties other than Left Parties, introduced Contributory Pension System for their employees from various dates after 2004. Left Front Governments of Kerala, West Bengal and Tripura refused to introduce the New Pension Scheme and they continued with the old defined benefit pension scheme. Congress-led UDF Government introduced NPS in Kerala. After BJP coming to power in Tripura also Contributory Pension Scheme is introduced recently. In West Bengal old Pension Scheme continues even now. Not only newly appointed Central and State Government employees, almost all new entrants of public sector and Autonomous bodies are also brought under the purview of NPS.

As per New Contributory Pension Scheme an amount of 10% of pay plus Dearness Allowance will be deducted each month from the salary of the employees covered under NPS and credited to their pension account. Equal amount is to be credited by the Government (employer) also. Total amount will go to the Pension Funds constituted under the PFRDA Act. From the pension fund the amount will go to the share market. As per the PFRDA Act – “there shall not be any implicit or explicit assurance of benefit except (share) market based guarantee mechanism to be purchased by the subscribers”. Thus the amount deposited in Pension Fund may or may not grow depending on the fluctuations in the share market. After attaining 60 years of age i.e., at the time of retirement, 60% of the accumulated amount in the Pension Account of the employee will be refunded and the balance 40% will be deposited in an Insurance Annuity Scheme. Monthly amount received from the Insurance Annuity Scheme is the monthly pension i.e., Pension is not paid by Government, but by the Insurance Company and hence NPS is nothing but Pension Privatization..

Thus it can be seen that the growth of the accumulated amount in the Pension fund depends upon the vagaries of share market. If the share markets collapse, as happened during the 2008 world financial crisis, then the entire amount in the pension fund may vanish. In that case employee will not get any pension. Every fluctuation in the share market will affect the future of pension of those employees who are covered under NPS. Uncertainty about pension and retirement life looms large over their heads. Even if there is a stabilized share market the 40% amount in the annuity scheme is not enough to get 50% of the last pay drawn as pension, which is the minimum pension as per old pension scheme. Many employees who entered in service after 01-01-2004 has retired in 2017 and 2018 after completing 12 & 13 years of service. They are getting Rs.1400- to Rs.1700- only as monthly pension from Insurance Annuity Scheme. If they have entered service in 2003 i.e., in the old pension scheme, they would have got 50% of the last pay drawn as pension subject to a minimum of Rs.9000- as minimum pension, that too without giving any monthly contribution towards pension from their salary. In short, NPS is nothing but NO PENSION SYSTEM.

Who is the beneficiary of this pension reforms? As in the case of every neo-liberal reforms, the ultimate beneficiary is the Corporates. The huge amount collected from the workers through pension fund is invested in share market by the Pension Fund Managers and this amount in turn can be utilied by the multi-national Corporates for multiplying their profit. Amount deducted and credited to the Pension fund from each newly recruited employees plus the employer’s share amount will remain with the pension fund and share market for a period of minimum 30 to 35 years i.e., till the age of 60 years. During this long period of 35 years crores and crores of rupees will be at the disposal of share market controlled by multinational corporate giants. Ultimate causality will be the poor helpless employee/pensioner.

Confederation of Central Government Employees and Workers and All India State Government Employees Federation (AISGEF) has been opposing the NPS from the very beginning and a one day strike was conducted on 30th October 2007. It was one of the main demand in all other strikes during these period. The campaign and struggle against NPS continued and as of now the subjective and objective conditions for a bigger struggle against NPS has emerged as almost 50% of the total employees in Central, State, Public sector and Autonomous bodies are now covered under NPS and are becoming more and more restive and agitated. 7th Central Pay Commission Chairman Retired Supreme court Judge Sri. Asok Kumar Mathur has correctly pointed out that “Almost a whole lot of Government employees appointed on or after 01-01-2004, were unhappy with New Pension Scheme. Govt. should take a call to look into their complaint”.

Confederation and AISGEF has decided countrywide intensive campaign culminating in one day strike on 15th November 2018 demanding that the Defined Contributory Pension Scheme (New Pension Scheme – NPS) imposed on new entrants must be scrapped and the Government should reintroduce the Defined Benefit Pension Scheme (Old Pension Scheme – OPS) that was in vogue for a century or more. We are also exploring the possibility of organizing an indefinite strike in the coming days exclusively on one demand i.e., SCRAP NPS, RESTORE OPS for which wider consultations are being made with all like-minded organizations.