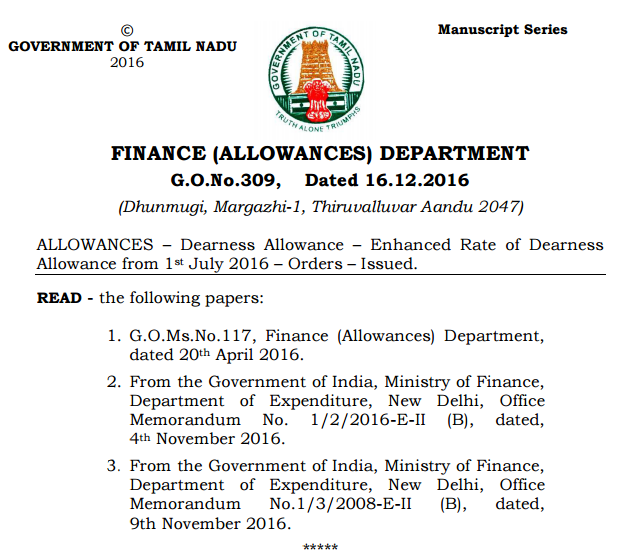 The Tamil Nadu Government today announced a seven percent of Dearness Allowance to its employees and pensioners with effect from July 2016.

Today the Chief Minister O.Panneerslevam has declared an another installment of additional 7% Dearness allowance with effect from July 2016 to the employees working under Tamil Nadu Government.

Following the announcement, the existing percentage 125 is increased to 132% from July 2016. The arrears from July to Nov will be paid in their bank accounts respectively.

Following the Central Government, the state government has declared DA to its employees from the existing rate of 125% to 132% with effect from 1.7.2016

ORDER:
In the Government Order first read above, orders were issued sanctioning revised rate of Dearness Allowance to State Government employees as detailed below:-

2. The Government of India, in its Office Memorandum second read above, has conveyed its decision on admissibility of the Dearness Allowance to its employees subsequent to implementation of the Seventh Central Pay Commission recommendations, as detailed below:-

3. The Government of India in its Office Memorandum third read above, enhanced the Dearness Allowances from the existing 125% to 132% with effect from 01.07.2016, to its employees drawing pay in pre-revised pay band/grade pay as per Sixth Central Pay Commission recommendations.

5. The Government also direct that (i) the arrears of the enhanced Dearness Allowances for the months of July to November, 2016 be drawn and disbursed immediately by existing cashless mode of Electronic Clearance System (ECS); and (ii) while working out the revised Dearness Allowance, fraction of a rupee shall be rounded off to next higher rupee if such fraction is 50 paise and above and shall be ignored if it is less than 50 paise.

8. The expenditure shall be debited to the detailed head of account`03. Dearness Allowance’ under the relevant minor, sub-major and major heads of account.

9. Necessary additional funds will be provided in Revised Estimate /Final Modified Appropriation 2016-2017. Pending provision of such funds,the Drawing and Disbursing Officers are authorized to draw and disburse Date from which payable Rate of Dearness Allowance (per month) 1st July, 2016 132 per cent of Pay plus Grade Pay the amount as ordered above.

The Pay and Accounts Officers / Treasury Officers shall admit and honour the bills, if otherwise found in order, without waiting for the authorization from the Accountant General (A&E),Tamil Nadu, Chennai.

ORDER (BY ORDER OF THE GOVERNOR)
K.SHANMUGAM
ADDITIONAL CHIEF SECRETARY TO GOVERNMENT