You are here: Home / Participation in any form of strike/mass casual leave/boycott of work by Government servants

The Department of Personnel and Training is being issued orders from time to time on all service matters including warning with instructions when Govt servant violate the CCS (Conduct) Rules. In that respect, the order insists that not to participate in any form of the strike which will be in violation of Rule 7 of the CCS(Conduct) Rules, 1964.

Subject: – Participation in any form of strike/mass casual leave/boycott of work etc. by Government servants – CCS(Conduct) Rules – regarding.

The undersigned is directed to say that the instructions issued by the Department of Personnel & Training prohibit the Government servants from participating in any form of strike including mass casual leave, go-slow etc. or in any way abet any form of strike which will be in violation of Rule 7 of the CCS(Conduct) Rules, 1964. The Supreme Court has also agreed in several judgements that going on a strike is a grave misconduct under the Conduct Rules and that misconduct by the Government employees is required to be dealt with in accordance with law. Any employee going on strike in any form would face the consequences which, besides deduction of wages, may also include appropriate disciplinary action.

2. A Joint Consultative Machinery (JCM) for Central Government employees is already functioning. This scheme has been introduced with the object of promoting harmonious relations and of securing the greatest measure of cooperation between the Government, in its capacity as employer, and the general body of its employees in matters of common concern, and with the object, further of increasing the efficiency of the public service.

3. Therefore, apart from the fact that any form of strike/mass casual leave/boycott of work would be in violation of the CCS(Conduct) Rules, going on any form of strike will also not be in the interest of the employees. Accordingly, the undersigned is directed to convey that if any employee or an association/group of employees, under any nomenclature, indulge in any form of strike/boycott of work in pursuance of any alleged demands, or send any letter conveying of their intention to organize any such event, in terms of the provisions mentioned in para-1 above, the salary of such employees for the day/days in question shall not be paid and the details of such employees shall have to be intimated by the concerned office where such an event took place to the Administrative Ministry/Department concerned, within 15 days of such incident for a decision on how to treat the unauthorized absence occasioned by such an action by the employees. This will be without prejudice to any disciplinary action that may be initiated against such employees. All ministries/Departments are requested to bring the contents of this O.M. to the notice of all concerned offices under them.

sd/-
(Suneel K. Arora)
Under Secretary to the Government of India 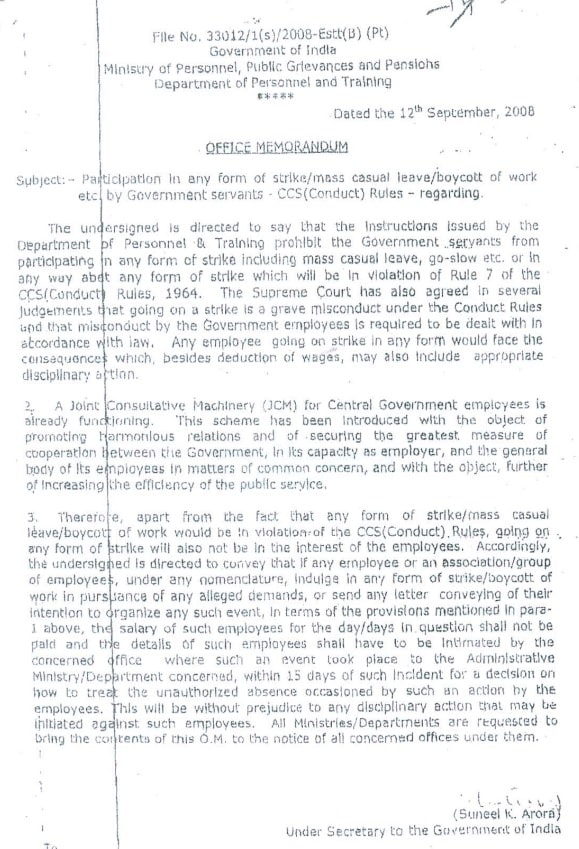