1. Hotel bills without Regn No, TIN No, VAT No etc.

3. Non-drawl of Ration certificate is not found if ration not drawn

4. Mess/Hotel bill as well as DA is claimed which unnecessarily leads to dis allowance in claims

5. NAC for stay in Hotel is obtained at the fag end of the duty without following the principle of preferring Govt Guest houses, Mess, Circuit houses etc

6. Nominal Roll for derailment of course/duty indicating name of officer not attached

7. Advance drawn is not indicated/deducted by the officer on submission of Adjustment claim

8. Detention certificate is silent about the provision of free boarding & lodging

10. Ink-signed copy of Min of Civ Avn relaxation sanction is not enclosed

1. Posting order and movement order is not enclosed, instead intranet /internet copy is enclosed, which is not acceptable in audit as mov auth

3. Allotment of Govt built accommodation letter at new duty station is not enclosed in support of claim for full baggage & conveyance increasing all round correspondence and delay

4. Lien on conveyance of family, personal effects and personal vehicle sanction from the competent auth is not enclosed even if the stipulated lien period is over and conveyed after that period. Hence, sanction to that effect is an audit requirement to admit the conveyance charges.

5. Family details are not mentioned in the claims

6. Ink-signed copy of Min of Civ Avn/ Ministry of Defence(Finance) relaxation sanction is not enclosed

7. RMA charges for local journey to station/ airports and Daily Allowance for expenditure during transit/ journey is claimed; the same is subsumed in Composite Transfer Grant w.e.f. 09/09/2008

8. Distance for cartage at both new and old duty stations is not mentioned claiming random amounts

1. Officers prefer LTC claims for journey by unauthorised modes viz own car, private buses/ own arrangement, which is not admissible.

2. Air-tickets are purchased for fare-basis other than LTC-80, which is on the higher side of entitlement of LTC-80 fare

3. DO II to the effect of change of Home Town is not published

5. Boarding passes are not enclosed with the claims

6. Local journey charges for visiting local site of the station are claimed. LTC is admissible on Station to Station basis.

7. LTC for parents is claimed for Clause of LTC in lieu of Home Town

8. LTC on Sick Leave Concession is not clearly mentioned

10. Ink-signed copy of Min of Civ Avn relaxation sanction is not enclosed

11. Non–availability of Air-ticket is quoted as reason for travel by Private Airline. 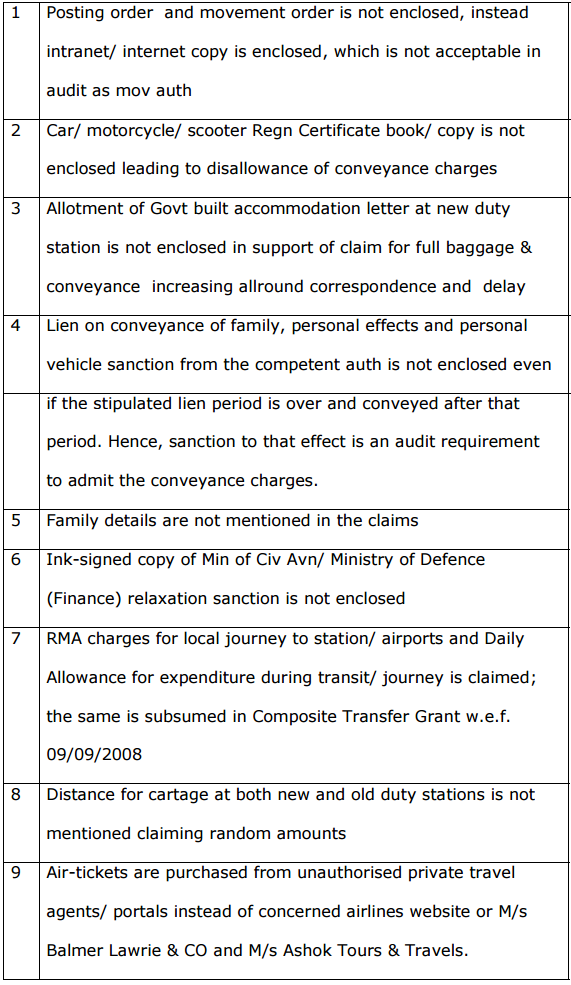 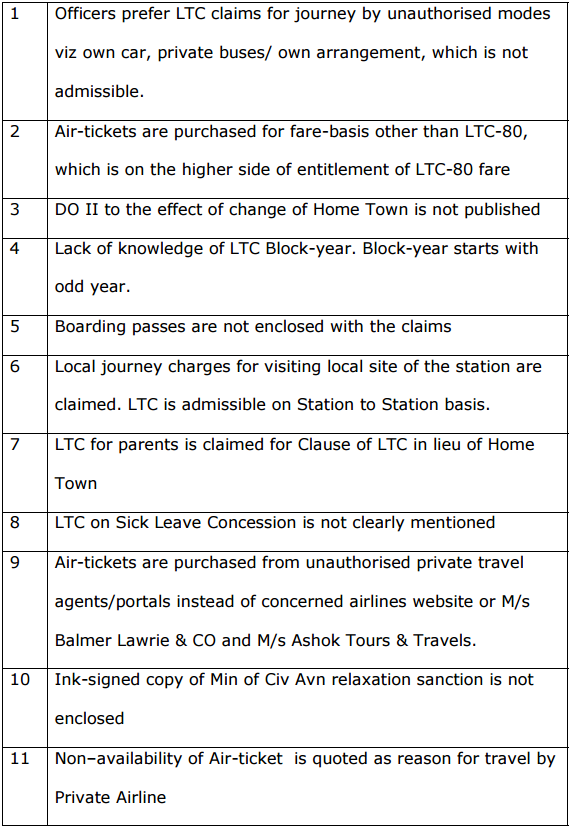