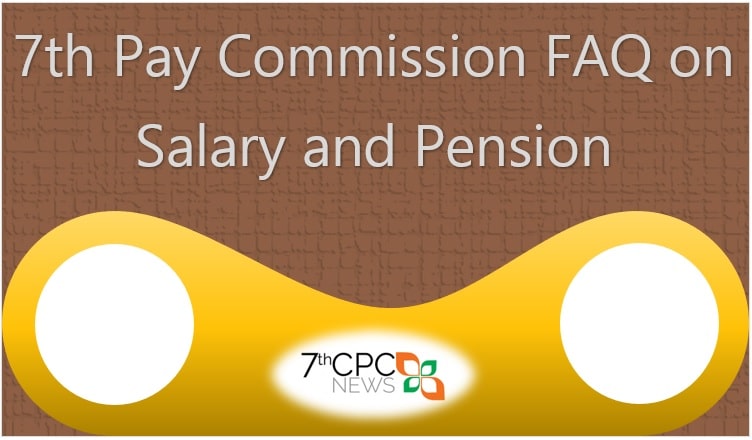 How can I fix my salary in 7th Pay Commission?

What is the pay matrix?

What is 7th pay matrix?

7th Pay Matrix is a table for calculating salary of Central Government employees with effect from 1.1.2016. The table is recommended by the 7th Central Pay Commission.

How do you fix a promotional salary?

Fixation of salary on promotion for Central Government employees as per the method prescribed in the Revised Pay Rules 2016 after implementation of 7th Pay Commission.

21%. But DA is temporarily has stopped for 18 months from January 2020 due to the reason for the COVID 19 pandemic.

What is the latest updation in 7th pay?

There are no updates in the 7th pay. Everything is over! And waiting for the 8th Pay Commission.

Will there be 8th Pay Commission?

Certainly, why not? Central Government is the only decision authority on this issue.

When HRA will increase?

Which rules govern pension and gratuity to the employees retiring from Central Government Civil Departments.

Is the date of voluntary retirement treated as duty?

Who is eligible for pension?

How is pension calculated?

Can Departmental proceedings be instituted after retirement?

When is departmental or judicial proceeding deemed to be instituted?

Can the pension/gratuity be withheld on conclusion of departmental /judicial proceedings?

Which pay is reckoned as emoluments for pension and gratuity?

Which pay is reckoned as emoluments for pension if the Government servant is on leave, suspension or deputation at the time of retirement?

Can a pension be withheld/withdrawn on grounds of misconduct after retirement?

Future good conduct is the implied condition for grant/continuance of pension. The appointing authority may, by order in writing, withhold or withdraw a pension or a part thereof, whether permanently or for a specified period, if the pensioner is convicted of a serious crime or is found guilty of grave misconduct.

Can a pension, once authorized, be revised to the disadvantage of pensioner on grounds other than misconduct under Rule 8 and 9.

Except under Rule 8 and 9, pension once authorized after final assessment shall not be revised to the disadvantage of the Government servant, unless such revision becomes necessary on account of detection of a clerical error subsequently. No revision of pension to the disadvantage of the pensioner shall be ordered by the Head of Office without the concurrence of the Department of Pension and Pensioners’ Welfare if the clerical error is
detected after a period of two years from the date of authorization of pension. The question whether it is a case of clerical error or not would be decided by the administrative Ministry.

What is the formula for revision of pension of pre-2006 pensioner/family pensioner?

In terms of para 4.1 of OM No.38/37/08-P&PW(A) dated 1.9.2008, the pension/family pension will be consolidated w.e.f. 1.1.2006 by adding together (i) The existing pension/family pension,(ii) Dearness Pension, where applicable, (iii)Dearness Relief @24% of basic Pension/Basic Family Pension plus dearness pension as admissible vide OM No.42/2/2006-P&PW(G) dated 5.4.2006 and (iv) Fitment weightage @40% of the existing pension/family pension. Where the existing pension at (i) includes the effect of merger of 50% of DR w.e.f. 1.4.2004, the existing pension for the purpose of fitment weightage will be re-calculated after excluding the merged DR of 50% from the pension. The amount so arrived at will be regarded as  on solidated pension/family pension w.e.f. 1.1.2006. The fixation of pension will be subject to the provision that the revised pension, in no case shall be lower than 50% of the minimum of the pay in the pay band plus the grade pay corresponding to the pre-revised pay scale from which the Govt. servant retired. The minimum of pay is the pay band/pay scale is to be reckoned in accordance with DoPPW OM No. 38/37/08-P&PW dated 30.07.2015.

What are the provisions regarding revision of pension of pre-2016 pensioners after 7 th CPC?

Is any ready reckoner available for revision of pension of pre-2016 pensioners by notional pay fixation method?

A Concordance Table for fixation of notional pay of pension/ family pension of employee who retired/ died in various grades of Vth/ VIth CPC period has been prepared and circulated on 06.07.2017. These Concordance Tables are available on the website of this Department, i.e. http://doppw.gov.in/ and http://pensionersportal.gov.in

Is there any online calculator available for fixation/ revision of pension?

A calculator for calculation/ revision of pension/ gratuity is available on the website of this Department, i.e. http://doppw.gov.in/ and http://pensionersportal.gov.in/

What is the amount of minimum and maximum pension after Seventh CPC?

From where can we download the pension /nomination Forms ?

All forms are available at the website of Department of Pension & Pensioners Welfare.

Whether older pensioners will get higher rate of pension?

Yes, the rates related to additional pension as applicable in the case of old pensioners hold good for family pensioners, as well.

Whether the provision of added years in qualifying service for computation of pension is still in force?

The benefit of added years of qualifying service for computation of pension/related benefits has been withdrawn w.e.f. 01.01.2006.

Whether the provision of added years in qualifying service has been withdrawn for calculating gratuity also?

Whether the additional pension/family pension available to old pensioners would be payable from the date of attaining age of 80 years or above or from the first day of the month in which the date of birth falls?

Does all leave period qualify for pension and gratuity?

Is the benefit of counting of past service under Rule 19 available to ex-serviceman re-employed to civil service / post?

What happens to the past service of a Govt. servant (appointed before 1.1.2004) who resigns to take up, with proper permission, another appointment under the Govt.?

Under Rule 26 (2) “A resignation shall not entail forfeiture of past service if it has been submitted to take up, with proper permission, another appointment, whether temporary or permanent, under the Government where service qualifies”. This also applies to a Govt. servant who joined Govt. service before 1/1/2004 and takes up another appointment in the Govt., on or after 1.1.2004. What is the impact of resignation (other than technical resignation) on qualifying service and pension? Resignation (other than technical resignation) entails forfeiture of past service. Therefore, no pension is payable on such resignation.

Will a Government servant who joined Central/State/Autonomous Body before 01.01.2004 be eligible for pension under CCS(Pension) Rules, if he takes up another appointment in Central/State/Autonomous Body after 01.01.2004 by submitting technical resignation in his previous organisation?
Yes, it has been clarified in Department of Pension & Pensioners Welfare OM No. 28/30/2004-P&PW(B) dated 26.07.2005 and 28.10.2009 that employees appointed before 01.01.2004 who were governed by Old Pension Scheme of their respective Governments/Organisation will be eligible to continue in Old Pension Scheme, if such scheme exists in new organization, where such employee submits resignation to take up new appointment with proper permission. Is the service rendered by an employee in Public Sector Undertakings(PSUs) counted for pension on moving to Central Government? As per OM no 28/24/94-P&PW(B) dated 13.09.1996, the service rendered in Public Sector Undertakings (PSUs) before joining service under the Government is not counted for the purpose of pension in Government.