Revision of pension of pre-2006 pensioners

Delinking of revised pension from qualifying service of 33 years.

The calculator has designed according to the PCDA circular 568. The rate of Minimum Guaranteed Service Pension and Ordinary Family Pension in respect of Pre-2006 Pensioners with effect from 1.1.2006

Hony, Rank of Naik, Havildar and Havildar holding Hony rank of Nb Sub are drawing pay in the pay scale of Sepoy, Naik and Havildar respectively. 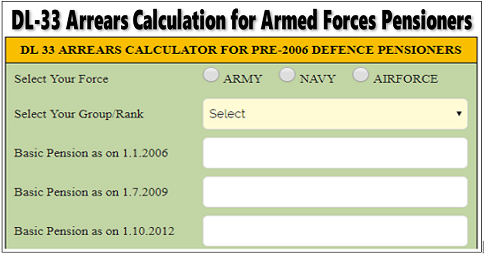