You are here: Home / Allowances as per 7th CPC – An Overview

All Allowances for JCOs/OR (Junior Commissioned Officer/ Other Rank) 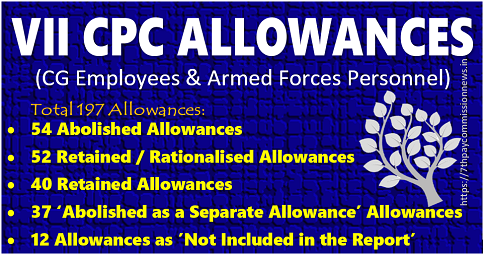 Allowances for Armed Forces Personnel as per 7th CPC – An Overview

After the implementation of 7th pay commission recommendations to the personnel of Armed Forces, many demands were listed on allowances to the Govt. The Central Govt decided to constitute a committee under the Chairmanship of Finance Secretary and Secretary of Home Affairs, Defence, Health and Family Welfare, DoPT and Railway Board as members to examine the recommendations of the 7th CPC on Allowances. The committee submitted its report on 27.4.2017.

It has two components, CEA and Hostel Subsidy. Both cannot be claimed concurrently.

Children Education Allowance: Rs. 2250 per month per child for two children only. CEA is admissible from Nursery to 12th classes.

Hostel Subsidy: Rs. 6750 per month per child for two children only. Applicable when children are studying in a boarding school away from the place of posting of the father/mother.

Educational Concession to Children of Personnel Missing/Disabled/Killed in Action.

Note: The combined amount of Tuition Fees and Hostel Charges shall not exceed Rs 10,000 Per month.

Rate of Qualification Allowance as per 7th CPC

Rate of Higher Qualification Allowance as per 7th CPC

Allowances for JCOs / ORs of Indian Army – An Overview