The 7th pay commission pay matrix table is for Central Government civilian employees. It is designed, keeping in view the new pay matrix and the massive opportunities that have unlocked outside government over the last three decades. It generates grander competition for human resources and the demand to attract and keep the finest available talent in government services. The 7th pay matrix table in the 7th Pay Commission is a number table comprising 760 cells. It is a single fitment table appropriate for over 30 lakh central government employees and shows 19 columns and 40 rows. The horizontal field shows numbers from 1 to 18 that coordinate with the functional role in the hierarchy. The vertical range signifies pay progression’ within that level. Also, an annual financial progression of 3.00% within each level is shown by a vertical line. According to the 15th ILC norms or the Aykroyd formula, the beginning point of the table denotes the lowest pay.

In the 7th Central Pay Commission, pay has been subsumed, the levels are now explained, and employees can now review their pay level and know their current status as well as their possible growth over the course of their careers. The complete world of pay levels has been demonstrated in the rationalized matrix so that it can be effortlessly understood via one simple chart. Besides, this table can be helpful for the calculation of pensions. 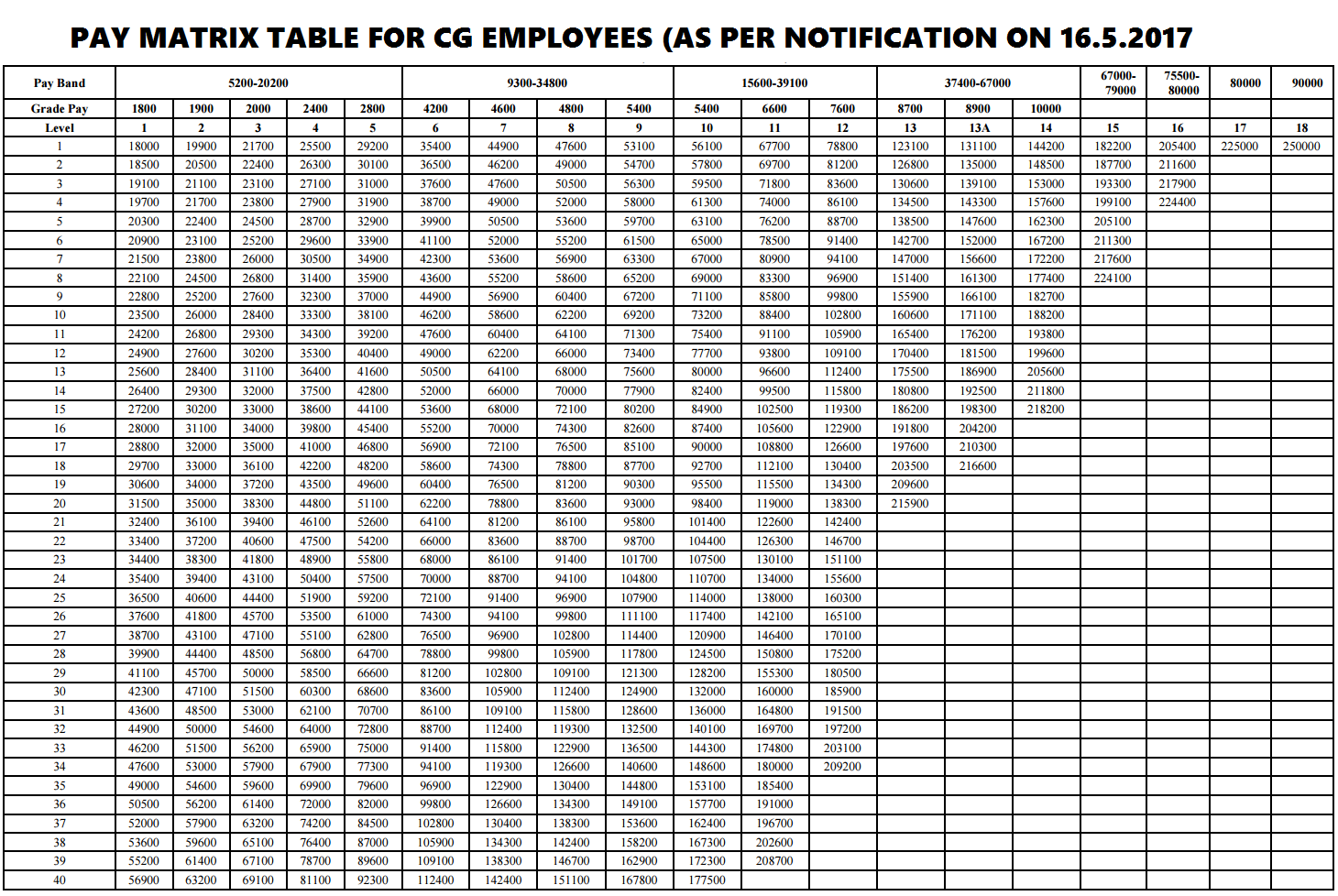 As per the 7th Central Pay Commission report, the Central Government staff working in Group B posts is 2,80,892. This group of the workforce is an important role in Central Government services! The towering service is done between Group C employees and Group A officers! The below pay matrix table for Group B staff!

The 7th pay matrix table has a total of 19 basic salary level structures (1 to 18 and including 13A). Click to view the individual pay level of all basic salary tables given below.

In the 6th pay commission regime the standard pay scales had been divided into 5 segments Pay Band-1, Pay Band-2, Pay Band-3, Pay Band-4, and HAG Scales. After the implementation of the 7th pay commission, the pay bands and grade pay structure was converted into a pay level system. The five divisions of the 6th CPC pay bands are indicated here with the infographic of the 7th pay structure. The below describes the pay level with minimum and maximum basic salary with 5 division pay bands!

Revised Pay Matrix Table Updated June 2017: After the implementation of the 7th pay commission recommendations to all CG employees, the Central Govt has amended the table for pay level 13. The Fitment factor has changed from 2.57 to 2.67 for the particular pay level and the pay hierarchy also changed accordingly. 7th Pay Commission (7th CPC) Revised Pay Matrix and Pre-Revised pdf Download.

What is the pay matrix table?

What is the benefit of the pay matrix table?

A lot of benefits, there will no calculation for pay fixation on promotion or MACP and annual increment calculation is also made simple with this table.

What is the payment structure in the pay matrix of the 7th Pay Commission?

What are the factors included in the new pay matrix?

Some factors of the common pay structure for entry-level employees are transparent pay structure, rationalization of the current grade pay structure, and the improvement in the frequency of the Modified Assured Career Progression.

When did the pay matrix table execute?

The pay matrix table was suggested by the 7th pay commission and the government enforced it on 1 January 2016.