7th CPC Basic Salary Table: After the implementation of the 7th pay commission to Central Government employees with effect from 1.1.2016, State Governments were also followed the pay matrix structure for its employees and pensioners.

Pay Matrix table contains 540 cells with numbers. Vertically 40 rows indicated as Index Number, on the contrary, horizontally 19 columns indicated as pay levels are included in this table. The difference between the two cells value is almost equal to 3%.

Pay Matrix Table for Central Government Employees: The new Pay Matrix which is simple, transparent, predictable and easily comprehensible. During their interactions with the Commission, the stakeholders placed many demands, ranging from common entry pay, rationalization of the existing grade pay chart, common treatment of like cadres, transparent pay structure as also increasing the frequency of the MACP. 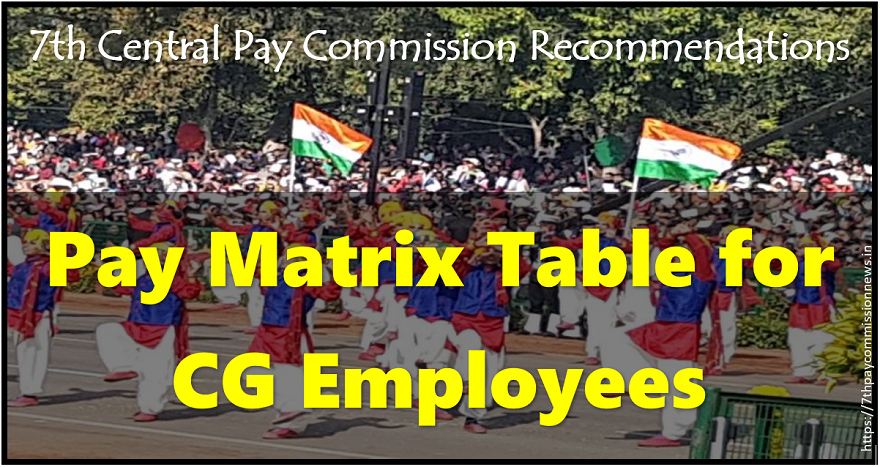 The new pay matrix incorporates all these features: subsuming the grade pay, the rationalized matrix represents the whole universe of pay levels in one simple chart. The levels have been rationalized too, displaying a logical pay progression. Employees would be able to see their pay level, where they fit in and how they are likely to progress over their career span. The Commission has also recommended simplified procedures for the computation of pension.

The major difference between in the pay matrix table recommended by the pay commission and notified by the Government is in the pay hierarchy of level-13. The Notification (16.5.2017) said the Index of Rationalization (IOR) of Level-13 enhanced from 2.57 to 2.67.

Is the Pay Matrix Table format is correct?

Yes, absolutely correct. The new pay matrix table is fit for all groups of Government employees (more than 35 lakh employees and officers) working under the Central Government.

What is special for Level 13 of the Pay Matrix Table?

Amendment has been made in pay level 13. The fitment factor (Index of Rationalization – IOR) has been increased to 2.67 . The basic salary structure has changed completely. The minimum basic salary is Rs. 123100 against Rs. 118500.

7th Pay Commission Pay Scales in Central Government: The below pay scales for the staff and officers working in the Railway Department of CRIS. [Click to view in detail]