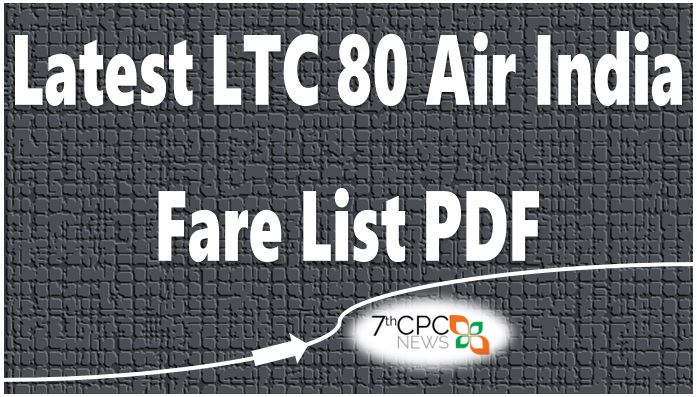 Guidelines for LTC 80 Scheme: The difficulties in determination of cheapest’ economy fare, it is clarified that officers and/or their families may choose to travel on LTC by any airline provided that the fare does not exceed the fares offered by NACL (Air India) under their LTC 80 scheme effective from 1 December, 2008 for sectors covered under the scheme. For sectors not covered by the LTC 80 scheme of NACIL, officers should ensure that cheapest economy tickets are purchased by either booking through internet/ airlines directly/authorized travel agents. [Department of Expenditure OM No. 7(1)/E.Coord./2008, dated 4th December, 2008]

Journey by Air lndia under LTC 80 scheme in economy class without package benefits: It may also be certified by each officer while submitting his/her LTC claim that no other benefit, other than air travel, has been availed of as a part of any package offered by any airline. [Department of Expenditure OM No. 7(1)/E.Coord./2008, dated 4th December, 2008.]

Major part of workforce in Central Government, Group C employees were permitted to travel from Delhi to Jammu and Kashmir (J&K), from Kolkata to North eastern states (NER) and Andaman & Nicobar islands (A&N) by Air. Booking or purchase of air tickets should be from authorized agents only. Air tickets should be purchased from the booking counter of Airlines or three authorized travel agents of Balmer Lawrie and company ltd., Ashok Travels and Tours and IRCTC. [Click to read more]

Air India LTC 80 Scheme: A new and revised fare list has been published with effect from 1st April 2018 by Air India.