Air Travel Allowed for CG Employees on LTC from their Headquarters 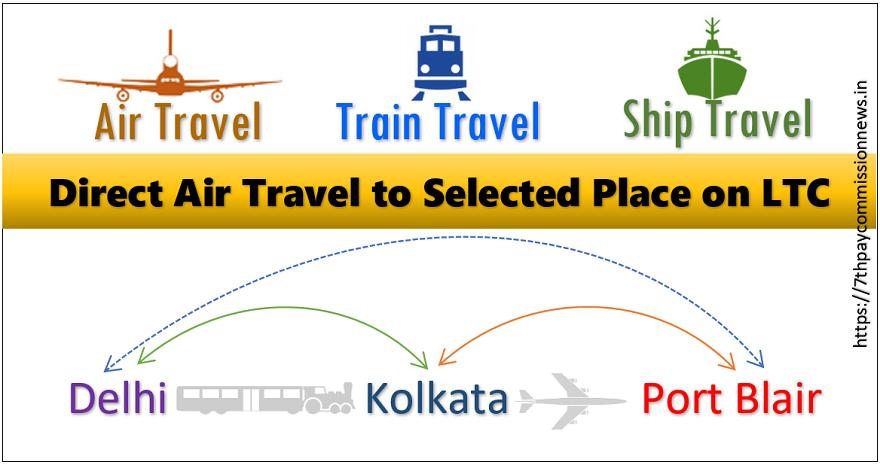 Direct Air Travel allowed from their headquarter to the place of visit on LTC for Central Government employees with some restriction.

Relaxation to travel by air to visit NER, J&K and A&N – DoPT’s Clarification orders on 20.6.2019 Direct Air Travel to Selected Place on LTC

Central Government employees and their dependents are enjoying air travel to Jammu and Kashmir, North East Region and Andaman and Nicobar islands last few years.They are allowed to travel by air in the following sectors only…

Employees who are in 7th CPC Pay Matrix Level 5 and below are classified as Non-Entitlement of Air Travel.

Department of Personnel and Training issued orders on Leave Travel Concession for Central Government employees and their dependents regarding Air Travel while on LTC from their Headquarter to Selective Place of visit on 20th June 2019.

As per the order, non entitled employees are allowed to direct travel from their headquarter by Air to North East Region, Jammu and Kashmir and Andaman Nicobar Islands. But the reimbursement of fare to the non entitled (Air Travel) employee will be calculated as two aspects.

The eligible reimbursement amount for the above case will be adding of Train Fare plus Air Fare as per the LTC 80 Scheme. In case of the actual direct air fare from the headquarter to the selected place of visit on LTC is less the above amount then the direct air fare only reimbursed.

The undersigned is directed to refer to this Department’s O.M. of even no. dated 20.09.2018 regarding the relaxation to travel by air on LTC to visit North-East Region (NER), Jammu & Kashmir (J&K) and Andaman & Nicobar Islands (A&N) and to say that as per para 2(v) of the aforesaid O.M., Government employees non-entitled to travel by air are allowed air travel in Economy class subject to maximum fare limit of LTC-80 fare in the following sectors:

Journey for these non-entitled employees from their Headquarters up to Kolkata/ Guwahati/ Chennai/ Visakhapatnam/ Delhi/ Amritsar is to be undertaken as per their entitlement.

2. In this regard, several references/RTI applications are received in this Department seeking clarification regarding settlement of LTC claims where a non-entitled Government employee directly travels by air from his Headquarters to the destination in North-East Region (NER), Jammu & Kashmir (J&K) and Andaman & Nicobar Islands (A&N) as opposed to their entitlement.

3. The matter has been examined in this Department in consultation with Department of Expenditure. It has been decided that cases of direct air travel by a non-entitled Government employee on LTC from his Headquarters to the place of visit in NER/J&K/ A&N under the special dispensation scheme, may be regulated as per their rail and air entitlement allowed under the special dispensation scheme of travel by air as under:

4. In their application to the staff serving in the Indian Audit and Accounts Department, this order issues after consultation with Comptroller & Auditor General of India.

sd/-
(Surya Narayan Jha)
Under Secretary to the Govt. of India